Borders may be on its final chapter

Borders may be on its final chapter

Scott Jagow: A lot of corporate profit reports are coming in this morning and they’re all telling the same story: The shaky economy and rising prices are killing the bottom line. For example, Carnival Cruises said fuel costs sank their profits last quarter. Same thing with Fed Ex. Winnebago reported a 67 percent drop in earnings. Who wants to drive a Winnebago at $4 a gallon?

Plus, people are cutting back on their discretionary spending, so companies like bookstores are losing customers. In fact, Borders said this morning it may put itself up for sale. More now from Marketplace’s Janet Babin at North Carolina Public Radio.

Janet Babin: Borders blames the economic downturn for its challenges. But the company has struggled to define itself — it’s not a deep discounter, and it’s not a well-known hangout scene either.

Paul Jones runs the internet archive Ibiblio.org at the University of North Carolina. He says Borders is also losing out to online competitors like Amazon. They can offer you any book you’re looking for.

Jones says there’s only two ways for brick and mortar stores to compete with that kind of inventory:

Paul Jones: One is to create an incredible atmosphere in which people want to be there, and the other is to have the deepest, deepest possible discounts. And I don’t think Borders took on either one.

Borders says its largest shareholder, a hedge fund, will loan it money to keep it in business — and may end up buying part of the company. 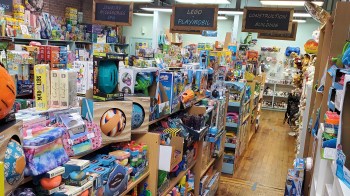