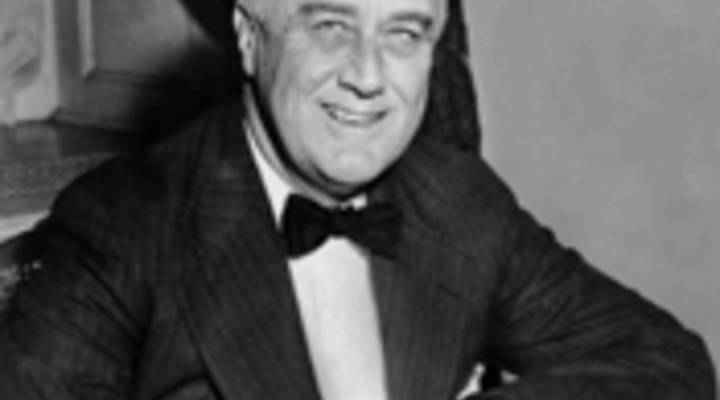 Tess Vigeland: Today marks the 75th anniversary of Franklin Delano Roosevelt’s first inaugural address. From that moment and for the next 12 years, FDR went to work rescuing an economy from the throes of the Great Depression. It came to be known as the New Deal.

For a look back, we’re joined by a familiar voice. Robert Reich is a professor of public policy at UC Berkeley and a regular commentator on this program. Today, he’s our historian.

Robert Reich: Well, remember, the country was in desperate economic shape. Franklin D. Roosevelt was elected in a landslide in November of 1932 to make a change, to right the balance, to do something.

Vigeland: And that started pretty much right away with his first inaugural address. Let’s listen to this clip from the beginning of that address as FDR was taking office:

Franklin D. Roosevelt: This nation will endure as it has endured, will revive and will prosper. So first of all, let me assert my firm belief that the only thing we have to fear is fear itself.

Vigeland: Bob, of course, this is one of the more famous lines in recent history, but I think a lot of people out there may not realize that it was indeed referring to the economy, not foreign aggression.

Reich: Yes, the great fear at that time was that the economy would continue to do badly, would do worse than ever. Remember, there’s a psychological component to economics. When people don’t trust banks to keep their deposits, when the don’t trust that the economy is really going to be there for them, people act in ways that almost create a self-fulfilling prophecy and that’s what FDR was eluding to. It wasn’t just psychology obviously; it was also some other inconvenient facts, such as the monetary system wasn’t working — the Federal Reserve Board was not pumping out nearly enough money; nobody knew the importance of generating a lot of additional liquidity in a situation like the Great Depression — and of course, the stock market was still completely frozen.

Vigeland: So, in very basic terms, what was the New Deal? Why was it so radical at the time?

Reich: Nobody before 1933 conceived of the federal government as having a major role to play in regulating or in stimulating the national economy. The dominant political and economic philosophy was laissez-faire, just leave it alone. Well, that changed pretty rapidly. People knew something dramatically had to be done.

Vigeland: And so, what was the proposal?

Reich: There wasn’t one proposal, Tess. It was much more trial and error. Roosevelt didn’t really know what he was doing. His economic advisors didn’t know either — there was no precedent for this. They started kind of an alphabet soup of agencies: the WPA — Works Projects Administration, the Securities and Exchange Commission, National Labor Relations Act. They enacted a whole bunch of social safety nets: Social Security, unemployment insurance. All of these were kind of groping in the dark for some answer to what could possibly be done to get the economy going again. Nobody knew what to do. Trial and error.

Vigeland: Let’s go to another clip, and I have to say, this seems particularly relevant today:

Roosevelt: There must be a strict supervision of all banking and credit and investments. There must be an end to speculation with other people’s money and there must be provision for an adequate and sound currency.

Vigeland: This was just ripped from today’s headlines. It could have been in a campaign speech.

Reich: Sounds like it could be any one of our candidates. You see, you have to understand some background. Leading up to the great crash of 1929, there was huge debt — the United States and many, many individuals, corporations very, very deeply indebted, a great concentration of wealth and income larger than it is today and also rampant speculation and these three conjured up a very dangerous brew which ultimately blew up. Roosevelt understood that something had to be done to end speculation. There was no regulation to speak of. One of his goals was to make the market work, not to replace the market.

Vigeland: Bob, we often hear that the New Deal is dead. Do you think that’s true?

Reich: Well, it’s certainly dead in terms of some of the agencies — the National Recovery Administration was struck down by the Supreme Court, the Works Projects Administration was ended by World War II. Also, I think it’s fair to say that Americans today feel they have less need for and certainly have less confidence in government, but there are certain legacies that nobody can deny. Not only Social Security, unemployment insurance, agencies like the Securities and Exchange Commission, but there’s also, Tess, I think, the notion that when things get very bad, government has to be there as a kind of last resort. We’re seeing the debate now with regard to the housing crisis, the credit crunch. The question in Washington and around the country and indeed, around the world is what should government do to make the markets work better. That probably is the enduring legacy.

Vigeland: Well, Robert Reich, thank you so much for joining us for this look back at 75 years after the New Deal with Franklin Delano Roosevelt.

Vigeland: Robert Reich is a professor of public policy at the University of California Berkeley. His latest book is called Supercapitalism.