Kai Ryssdal: Just because both chambers of Congress have approved a new Farm Bill doesn’t mean the dealing’s done. Negotiators from the House and Senate have two weeks to work out a compromise between their differing versions. Otherwise, the $280-billion package dies.

Lawmakers are trying to figure out how to pay for billions of dollars in farm subsidies and nutrition programs.

Jeremy Hobson reports from Washington that the U.S. isn’t the only country wrestling with that problem.

Jeremy Hobson: While the U.S. economy has been heading south, India’s economy has been growing at 8.5 percent. But it doesn’t feel that way to the country’s agricultural workers, who make up 60 percent of the population.

Fred de Sam Lazaro: Thousands and thousands of Indian cotton farmers have killed themselves in the last decade, driven by humiliation.

Fred de Sam Lazaro has made documentaries about India’s struggling farmers. He says their shame stems from financial ruin.

[Indian Farmer]: The crop is just dried up. We have so much debt, my son in law couldn’t pay it. I have no idea how we can deal with it now.

That farmer’s story is common, and now, the Indian government is stepping in: It’s forgiving $15 billion of debt for small farmers.

de Sam Lazaro says voters are demanding a share of the booming economy:

de Sam Lazaro: And the politicians, especially during an election season which is starting up now in India, are going to be mindful of that.

Sound familiar? It should on Capitol Hill, where lawmakers are pushing through subsidies in a huge multi-year farm bill right in the middle of an election season.

But Sallie James of the Cato Institute says farmers aren’t suffering near as much here. Prices for commodities are high and ethanol mandates are paying off:

Sallie James: Things are so great right now. I don’t know that farm subsidies are as grippingly important as they would have otherwise been.

But James is certain the bill will get through Congress. The only question is how expensive it will be and whether there will be tax increases or cuts elsewhere to pay for it. 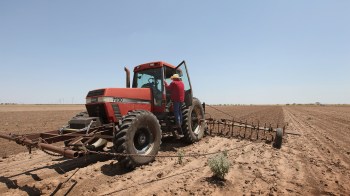 Farm bankruptcies up sharply in 2019