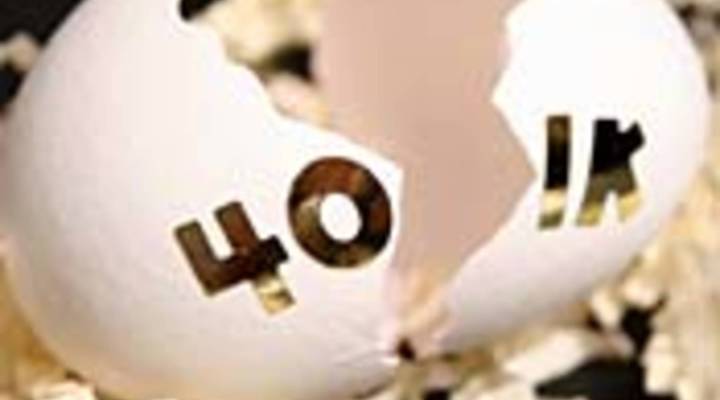 Robbing from your own retirement

Robbing from your own retirement

KAI RYSSDAL: Real estate doesn’t much work this way anymore but back when the market was still soaring, homeowners were using their houses like ATMs. They’d tap into their equity and spend the money on all kinds of things. Too often it was vacations or new cars not sensible stuff like new roofs or refrigerators. Now that the bubble has burst many of those same people owe more money on their homes than the houses are worth. But they still want new stuff so they’re turning to another kind of piggy bank. Stacey-Vanek Smith reports.

STACY VANEK-SMITH: The number of workers tapping their retirement plans for loans jumped 7 percent between 2006 and 2007. That’s according to a survey out today from the Transamerica Center for Retirement. Center President Catherine Collinson says it’s a worrisome trend.

CATHERINE COLLINSON: The entire dynamic of a 401K plan is all about saving on a consistent basis over a long period of time. Any breaks from saving or withdrawals from those accounts is only going to diminish the size of the nest egg when people retire.

Collinson says what’s worse, is that about half of workers took out those loans to pay off debt. That’s roughly doubled from the year before. Liz Pulliam Weston is a personal finance columnist for MSN Money. She says 401(k) loans do have advantages. Because you’re essentially borrowing from yourself, interest rates are low and your credit’s not an issue.

Still, Weston says, there are huge risks like if you lose your job.

WESTON: Most plans are set up so that you are forced to pay back that money within 30 to 90 days. If you don’t do so, then the balance of the loan is treated as a withdrawal and that is a disaster. You owe taxes on that money, you owe penalties on that money and even worse you’re losing all the future tax deferred returns you could have earned.