KAI RYSSDAL: Say what you will about bureaucrats, and people do say plenty. The truth is we need them. They keep the government running — until they leave. The Chairwoman of the Federal Trade Commission said today she is stepping down. Deborah Platt Majoras is going to leave next month to become the General Counsel at Procter and Gamble. Her departure leaves just four commissioners at the Federal Trade Commission. But it is far from the only agency in town with a vacuum at the top. Jeremy Hobson reports now from Washington.

JEREMY HOBSON: The six-member Federal Election Commission is now down to two, which means it can’t do its job, which means John McCain doesn’t know if he has to abide by federal spending limits in his campaign for the Presidency.

MICHAEL TONER: There’s never a perfect time to go, but I felt like it was an appropriate time to go. But I have to say I never foresaw what has unfolded over the last year or so with this total stalemate on Capitol Hill.

That stalemate has also left the nation’s mine-safety commission pretty useless. And the Consumer Product Safety Commission. That agency regulates more than 15,000 products to keep the public safe from injury or death.

Sorry America, you’re on your own.

CARY COGLIANESE: When there isn’t a quorum on multi-member agencies, big decisions on important issues just simply can’t get made.

That’s government regulation expert Cary Coglianese at the University of Pennsylvania. He says these agencies can still do their day-to-day work and make small decisions. And that this happens at the end of every Presidency. But Paul Light, an expert on presidential appointments, sees something different this time.

PAUL LIGHT: George Bush is having the worst 8th year of any two term Presidency since we created the two term limitation.

PAUL LIGHT: I don’t think there are a lot of tears being shed in the administration right now.

He says it comes down to an anti-regulation President versus a pro-regulation Congress.

President Bush has nominated replacements. But when faced with the choice of some of the President’s nominees and nobody, one Democratic Senator said she’ll take nobody. 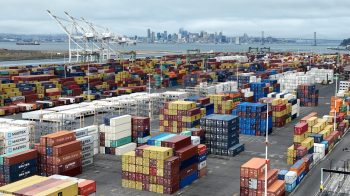