KAI RYSSDAL: John McCain’s turning today’s article in The New York Times to his advantage. He’s trying to raise a couple of bucks off it in a fundraising e-mail that went out to supporters this afternoon. Hillary Clinton’s a little short on cash herself. Barack Obama outspent her four to one in Tuesday’s Wisconsin primary. We learned last month she was forced to lend her campaign $5 million out of her own bank account. But Marketplace’s Steve Henn reports some wealthy Clinton backers think they can help.

AD: If speeches could create jobs, we wouldn’t be facing a recession. But it takes more. As senator, Hillary Clinton passed legislation to bring investment and jobs to struggling communities.

STEVE HENN: Check out this ad that just started airing in Ohio.

But the Clinton campaign didn’t pay for it.

That’s an independent political group, or 527. These groups can air issue ads, but not campaign ads. But the American Leadership Project is airing this ad and more in Texas and Ohio. For Clinton’s struggling campaign, that’s a boon.

SHEILA KRUMHOLTZ: Fully one-third of Clinton’s money last year came from people who can’t give her another dime for this campaign.

KRUMHOLTZ: Reliance on those giving the maximum, or even near the maximum, is a big problem ultimately for a campaign.

But those same maxed-out donors can give as much as they want to this new pro-Clinton group — and Fred Wertheimer says that’s just plain wrong.

WERTHEIMER: We have been dealing, in large part, with massive violations of the campaign finance laws by individuals and groups who do not care about and are not worried about the consequences.

Wertheimer says by the time federal regulators can act, this election will be over. 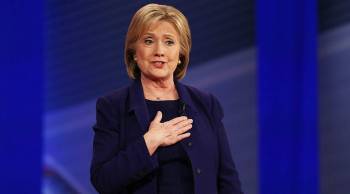