Mustaches for charity, not just irony

Mustaches for charity, not just irony

BOB MOON: Okay, help me out here. It’s my job to create some kind of logical flow for the program, so just go with me on this one, if you will. From pennies with facial hair to the flip side of that coin, pennies thanks to facial hair. In the world of charitable giving, 20-somethings show up in surveys as the least likely age group to donate, so how did one New York City charity get scores of young men to fundraise for kids in the Big Easy?

Alex Goldmark got the answer, by a whisker.

ALEX GOLDMARK: Call it humiliation for a good cause. That’s the secret to Mustaches for Kids, a seven-year-old fundraising group with 11 different chapters, including its largest in New York City. In a trendy Manhattan bar, 25-year-old Nick Leavens has mixed feelings about his patchy but respectable mustache.

NICK LEAVENS: It finally came in. I was worried for two or three weeks. It looked like if you were to wet your lip and put dried cocoa powder on it, that brown crust look, not so attractive, not so good for the love life.

It’s like a quirky walk-a-thon. Leavens grows an embarrassing mustache for four weeks, then gets his friends and relations to “sponsor his mustache” with donations. He raised $750 for the Children’s Hospital of New Orleans.

ROGER GORMAN: This is the first time we’ve ever actually made money off of mustache growing.

Roger Gorman is the director of development at the hospital, which has received $11,000 from the New York Chapter.

GORMAN: It helps us offset a tremendous loss that we’ve sustained. To have somebody, out of the blue, contact us and say, “Listen, I’d like to help” I think that’s pretty important.

Important, because the fundraisers are 20-somethings, a demographic that usually spends what little money it has on itself. So why did nearly 50 young men endure snickering co-workers and itchy upper lips?

Because it’s fun. Mitch Goldman is one of the organizers.

MITCH GOLDMAN: OK, Sweetest Stache Competition is a cross between a beauty pageant, a costume ball and a police lineup.

In a pleasantly chaotic bar basement, dozens of friends cheer on the “growers” through a Q and A round, a touch test and even a beer-foam-retention round.

The competition harkens back to the group’s founding, when two friends wagered over who could grow the sweetest mustache. Since then, Mustaches for Kids has raised over $130,000 for children’s charities. To keep it fun, organizers spend dozens of hours discussing mustache minutiae and arranging weekly mustache-related social events.

GOLDMAN: All this for charity. 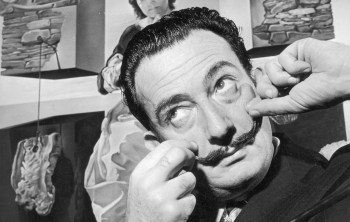 From “Walrus” to “Zorro,” the CDC breaks down what facial hair styles do and don’t work with face masks