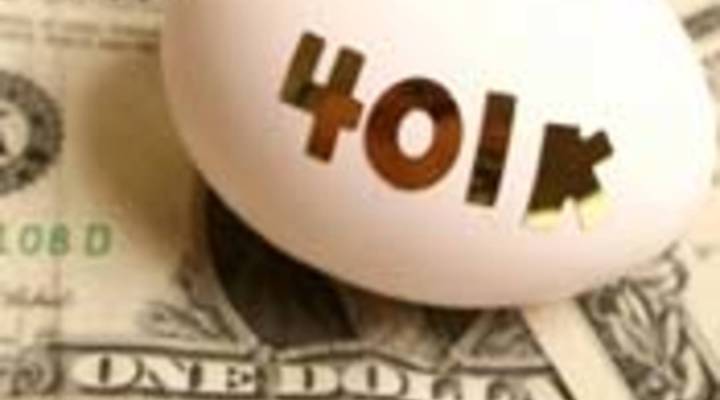 KAI RYSSDAL: Responsible investment advisors are all probably telling their clients the same thing right about now. Forget what the stock market’s doing today. Focus on the long haul.

But come on. Admit it. Last time you opened a quarterly statement from your 401(k) you did a double take when you saw how much money you’d lost. Little did you know, that even in good times you could be losing thousands of dollars, thanks to the fees tucked inside most retirement plans.

Tess Vigeland hosts our weekend personal finance program, Marketplace Money. She’s got the first of a two-part report on those fees and the damage they can do to your golden years.

TESS VIGELAND: The employees of St. Paul Shipwrights, a yacht restoration company in Minnesota, are hoping to stash away a bigger chunk of their salaries toward retirement, so office manager Rebecca Peterson decided to look into 401(k) plans. She started by meeting with a representative of a local bank that also serves as a 401(k) management company.

REBECCA PETERSON: You know, she started laying out these fees, and you know you’re looking at a $1,400 startup fee, and then it said $75 per participant. In parentheses it says that there’s a $3,000 minimum record-keeping fee. You know, already we’re looking at you know $300 per person to run this plan.

The list of fees went on, and on. Most 401(k) participants know they’re paying for somebody to manage their plan, but many have no idea just how many fingers are in that pot. There’s the subtransfer agent fee, the 12b-1 fee, early-redemption fee, custodial fee, wrap fee, investment advisor fee, attorney and actuary fees. . . and those fees are charged even if your 401(k) is losing money. Pension consultant Matthew Hutcheson says many of them are nowhere to be found on your quarterly statement.

MATTHEW HUTCHESON: Well most participants think that they’re paying $20 per year contract charge for example, but what they haven’t told you is that the underlying fund managers, those who are actually managing the investments, they charge a fee.

Hutcheson calculates up to 14 different individuals or companies could be taking a piece of your retirement fund, and it all adds up to big money.

HUTCHESON: Over a 20, 25 year period, if you are being charged a total of 1 percent in your retirement account, the ultimate benefits that you will receive when you retire, at let’s say age 65, will be reduced by approximately 20 percent.

And Hutcheson points out that the average 401(k) plan charges slightly more than 3 percent.

HUTCHESON: Over a regular working lifetime of a regular person we’re talking about $80,000.

Those kinds of numbers caught the attention of Congress. It’s held several hearings into 401(k) fees and the fact that nobody can really figure out how much they’re being charged. One main target is something called “revenue-sharing commissions.” Employers often hire third parties to help them choose a mutual fund company for a 401(k) plan. Sometimes the mutual fund company then pays commissions to that third party with money from your 401(k) account.

DAVID WRAY: The key here is that you want service and performance before you get concerned with fees.

David Wray is president of the Profit-Sharing/401k Council of America.

WRAY: There are a lot of legal issues involved in managing a plan. There are compliance issues with the government. We want to have the very best plans with the top quality service for our 401(k) participants.

And Wray argues that employees in 401(k) plans are actually getting a good deal.

WRAY: If you’re at a large company, and probably two-thirds of 401(k) participants are in a large company, the fees are probably about one-fifth of what they would be if you were actually investing on your own as a retail investor.

Wray also points out that by law employers have to make sure fees are “reasonable.” What’s reasonable?
There is no standard definition. All of which puts office manager Rebecca Peterson in a bind.

PETERSON: Actually you know kind of makes me want to throw up my hands and just invest in pork bellies.

Instead she’ll spend the next several months trying to strip the fat from her company’s 401(k) plan.

KAI RYSSDAL: Tomorrow, how much you should be allowed to know about the fees being charged to your 401(k)? Believe it or not, it’s up for debate.