KAI RYSSDAL: If most consumers could get 10 percent off their next big purchase,
maybe even 20 percent, it’d get them spending. Unless the item in question is a new home. Builders of new houses cut prices last month. Didn’t do a lick of good. The Commerce Department reported today, sales fell to their lowest level in almost 13 years, capping a record drop for all of 2007. It’s tempting to say this has to be the bottom of the housing market.

We asked Marketplace’s Bob Moon to find out whether there’s any reason to believe 2008 home sales will be different.

BOB MOON: The sound of new home construction has given way to a different kind of cutting lately. Builders of new homes especially, have been making deep cuts in their prices.

EDWARD LEAMER: I would strongly urge them to cut the cutting, because it’s only hurting your bottom line, not helping it.

LEAMER: It’s having the opposite effect, because it’s creating, on the part of buyers, a sense that there are more cuts to come. Rather than stimulating sales, those price cuts are actually reducing sales.

And as long as prospective buyers sense prices could keep falling, they’ll be reluctant to commit to a costly mortgage, so says economist Ian Shepherdson at High Frequency Economics. He’s convinced what home builders need to cut, even more aggressively, is their production, and until they do, even another cut in interest rates by the Fed this week might not help much.

It’s all a vicious circle that Shepherdson has no reason to believe will end anytime soon.

SHEPHERDSON: My guess is that we could see sales dropping another 20 percent or so from here, and that would mean that from the peak they could have dropped by something like two-thirds, which would be an absolutely enormous decline.

He says it took three years to recover from the last housing-market recession of this size in the late 1970s and early 1980s. Unlike now, tight credit wasn’t a problem back then, and he says that makes this downturn even tougher to turn around. 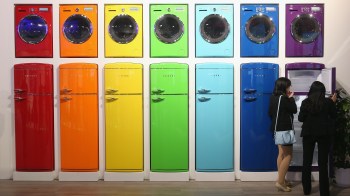