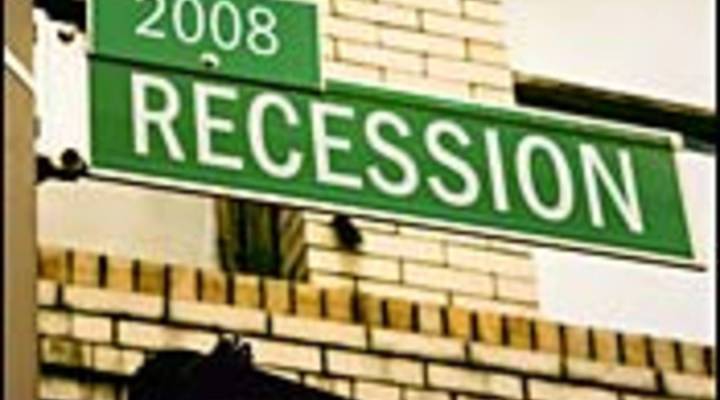 Are we there yet?

Are we there yet?

Tess Vigeland: We’ve been hearing this word recession gather steam for weeks, if not months now. It’s often equated with dark storm clouds and the like.

But we wanted to know what you think about whether we’re in one and why, so we sent reporter Kat Shiffler out to the streets of Washington, DC:

Kat Shiffler: Do you think we’re in a recession?

Man: Well, it seems that we’re on our way.

Man: It sounds like we’re starting to be in one, yes.

Shiffler: What are the factors that have led you to believe this?

Woman: My boyfriend is unemployed and is having a really difficult time getting a job and he has two masters degrees.

Shiffler: Now, are you planning to do something different with your money or your portfolio as a result?

Man: I have a certain amount of money that goes into a portfolio of stocks and I minimize my transaction costs by really not moving it around much.

Man: I was thinking of buying a house and it certainly makes me shakier about doing that at this moment.

Vigeland: Alright, so at least that unscientific sampling tells us this is definitely on people’s minds. But are there any silver linings in those dark storm clouds?

Mike Mills: The word “Recession” is now synonymous with the word “apocalypse”.

That’s Mike Mills. He’s editor of the Washington Business Journal. But despite our collective visions of the four horsemen, he says recession might just be a well-deserved wake up call:

Mills: I think America at this point is ready to get on with it, and what they really want more than anything else is the comfort of knowing that the analysts are aware of the pain that they’re feeling and hopefully they think it might create a feeling that we should all come together and batten down the hatches and try to spend less and save more and try to hold onto our jobs.

And Mills points out that fear of recession usually wakes government out of its slumber — witness this week’s Fed rate cut and the proposed stimulus package.

But for many of us it’s hard to imagine what kind of real damage a recession can do. It’s not like inflation, where we feel it in our wallets at the checkout counter and economic historian Amity Shlaes says the average American voter is too young to remember the pain of past recessions:

Amity Shlaes: Someone who’s 44 years old became an adult in the 80’s. That means he’s never really experienced a prolonged downturn. He didn’t even experience what happened when Fed chairman Volcker pushed the interest rate up to, what, 20 percent?

Shlaes, who works at the Council on Foreign Relations, credits Paul Volcker with knocking down inflation in the decades that followed.

But inflation-fighting also comes with side effects. Today they’re called bubbles: the dot-com bubble, the housing bubble. Of course for those of us who bought into those bubbles, those manias… do we deserve the recessions that follow?

Maybe. As Treasury Secretary Andrew Mellon put it after the 1929 market crash, people will work harder, and live a more moral life.

Daniel Gross: Politically that’s not a very tenable position, but I think there is sort of something to that. We have to get these bubbles out of our system, get up and then move on again.

That’s Daniel Gross, the “Moneybox” columnist at Slate magazine. He says if the U.S. does fall into recession this year, the extent of the damage will hinge on one factor: employment.

Gross: Most people get most of their income from their jobs, so as long as we don’t have huge job loss, it’s not that devastating to people personally. And I think that was the case in 2001: we had a brief recession, it was really confined to the dot-com technology bust and we came through it rather quickly.

Gross says a recession would also force U.S. companies to learn how to better compete in the global economy.

But, in the end, he says, a recession is pretty much always bad news.