KAI RYSSDAL: Not that you needed another opinion on whether we’re in a recession yet or not, but Alan Greenspan chimed in again today. The former Fed chief says we aren’t, yet. We’re right on the edge though.

It’s easy to oversimplify as you try to explain something like an interest rate cut, but the news out of Paris this morning does have a certain connect-the-dots quality to it. Societe General is the second biggest bank in France. It revealed today one of its traders racked up catastrophic losses in fraudulent transactions. The bank tried to undo the damage by selling into a falling market, one that Ben Bernanke and the Federal Reserve were keeping a close eye on.

From the Marketplace European Desk in London, Stephen Beard has more.

STEPHEN BEARD: France’s second biggest banks has been humiliated by a junior trader. Thirty-one-year-old Jerome Kerviel made massive bets in the futures market, without his managers knowing. He knew how to avoid detection, says analyst Peter Hahn.

PETER HAHN: Uniquely this trader had prior work experience in the area that monitored and was the back office. He knew how to beat their system and how to keep betting without being caught.

The bank discovered his secret on Saturday and found unauthorized bets worth $80 billion. The bank unloaded those futures on Monday, just as the markets tanked. The huge sales may have even fuelled the downturn in share prices. Nick Leeson, the rogue trader who brought down Barings bank in 1995, thinks that the French trader was, like him, motivated by fear of failure.

NICK LEESON: People who are working in that fast-paced environment that is so built around winning and making money, the fear of failure is the thing that they just can’t confront.

Unlike Barings, the French bank is not going bust, but it has to raise $8 billion in emergency capital. After the sub-prime crisis, another serious blow to the banking sector, but American bankers may at least derive grim satisfaction from one aspect of the affair. France has always crticized what it calls “the excesses” of American capitalism. Now the biggest ever loss incurred by a financial trader has happened in France. 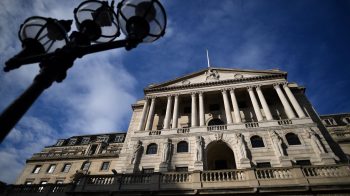 With more Brits retiring early, the Bank of England warns of a shrinking workforce — and rising inflation