All the work, none of the benefits

All the work, none of the benefits

KAI RYSSDAL: Next time you get a chance, sneak a peek at the woman in the office next door, or the guy who’s got the cube next to yours. They might do similar jobs, work the same hours, maybe even have a similar title, but they might have a different arrangement with the company — full-time staffers who aren’t on staff.

Marketplace’s Lisa Napoli looks at a growing part of the workforce.

LISA NAPOLI: Matt Wilcox was excited when he landed a gig as a copywriter at an ad agency in Vermont — then he heard the terms.

MATT WILCOX: They said “We’d like to hire you on a permalance basis, which means you will work full-time and we’ll pay you a salary, but we’re going to consider you a freelancer.” In every measurable sense I was full-time, except I had the title of “permalancer.”

Which meant he didn’t get as many benefits, and he’s much easier to fire — unlike his coworkers who had staff jobs and more protection. Welcome to the new face of the impermanent American workforce — fourteen million people and growing. Rising health care costs and an elastic demand for labor mean businesses want people to work full-time without having to make any real commitments to them. Labor experts say you see this trend in every kind of work, from security guards and janitors to city planners and college professors.

CATHY RUCKELSHAUS: So it really runs the gamut across the economy.

That’s Cathy Ruckelshaus of the National Employment Law Project. She says of course there’s a simple reason employers like this deal — money.

Some permalancers do get benefits, although they tend to be less extensive than their coworkers who are on staff. When media giant Viacom tried to reduce health coverage and yank paid vacation days for its permalancers at MTV this past December, the permalancers went on a well-publicized strike.

MTV PERMALANCERS: We want to be treated well, right? Right. That’s why we’re ut here. And it’s just not fair to call us freelancers when we’re doing full-time work, and to not provide us with the full-time benefits.

As a result Viacom said it might convert some of the permalancers to full-time staff, and would reconsider the benefits cut. Something similar happened at Microsoft. Late in the year 2000 the software giant agreed to pay $97 million to settle a class action lawsuit brought by thousands of workers employed as “permatemps.” They were angry they didn’t get benefits that staffers received.

MARCUS COURTNEY: The workers that worked and built the buildings at Microsoft had better benefits than the contractors that were making the products.

That’s Marcus Courtney with WashTech, an alliance formed a decade ago by Microsoft contract workers. He says since the Microsoft case the number of permalancers has grown.

COURTNEY: It’s not illegal. It’s for companies to hire permalancers and pay them lower wages and fewer benefits than a direct employee.

Courtney says to stay within the letter of the law many companies lay off permalancers every so often to show they aren’t full-time employees. Sara Horowitz founded the Freelancers Union. It’s an advocacy group for independent workers that lets them buy insurance that they can’t get at their jobs. Over the past five years her membership has grown. She says we have to accept that permalancing is here to stay.

SARA HOROWITZ: Look, this really is the new reality. People are going to be working short term. We’re not going back, but we have to start having it so that there’s a way that people can be economically secure in this.

As for the ad copywriter Matt Wilcox, he found out just how insecure permalancing can be. Right after the new year, after three months at the ad agency, he was told there wasn’t enough work, and that his job was over — that day. 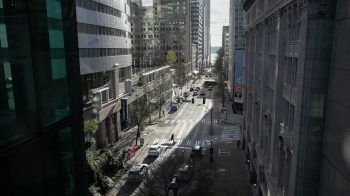