Early Fed cut could precede another

Early Fed cut could precede another

Scott Jagow: Joining us now is John Authers, investment editor for the Financial Times. John, about the rate cut, what kind of message is the Fed sending here?

John Authers: The Fed wants to show the market that it’s listening to them, that it cares, and that it will act very aggressively to head off a recession. The great risk is by cutting so much only a week before they were due to have a meeting anyway, they’re tacitly or maybe explicitly admitting that they’re no longer in control of the situation.

Jagow: Now, do you think this rate cut this morning replaces the rate cut that we thought was coming next week, or could we see another one?

Authers: I would imagine it was intended as a replacement. The market, on the other hand, is quite clearly betting that they will, indeed, have to cut even more next week. If you look at the market for Fed funds, futures, they’re now signaling something in the region of a 75 percent chance that they will cut another half of a percentage point by the end of this month.

Jagow: So in essence, then, the Fed has put itself possibly in the situation where it will have to cut rates again, because the market expects it, if that’s what the Fed is trying to do in calming the markets.

Authers: Yes. The analogy of a parent with a small child having a tantrum is where we are at at this moment. If you want to quiet them down, you may have to set a very bad precedent by giving them what they want.

Jagow: All right. John Authers from The Financial Times. Thank you. 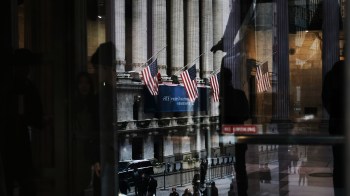