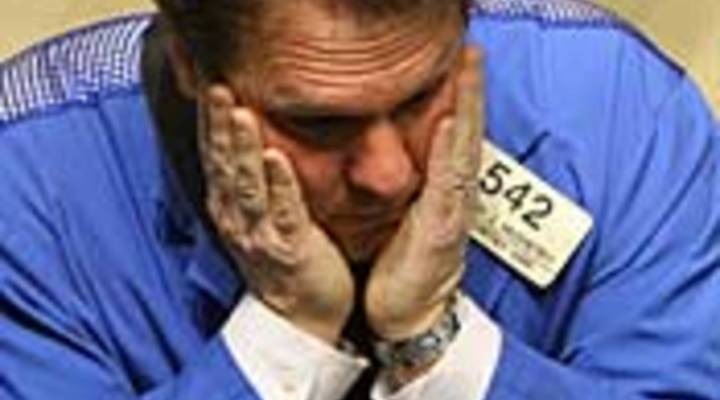 Being an investor is getting scary

Being an investor is getting scary

Kai Ryssdal: There’s some discussion out there about whether or not we might be in a recession already. To judge by the stock market, the bad times are upon us now: since New Year’s the Dow has dropped nearly 10 percent.

That’s almost enough right there to official qualify as a market correction.

Of course, if you ask money managers, they’re saying what they always say: Sit tight and wait out the storm.

Stacey Vanek Smith: Being an investor these days is getting downright scary.

Steve Goldstein is a retired government employee and he’s living off of his retirement account. Its value has dropped about 10 percent since last year. He says the markets have him in a bind:

Goldstein: If it does drop preceiptiously, I’m not sure what I can do, because once it drops precipitously, it doesn’t make sense to get out.

But a lot of investors think it does right now. They’ve started yanking money out of stocks and stashing it in safer havens like Treasury bonds. Musician Ed Boyle has moved a major chunk of his savings into gold:

Edmund Boyle: I’m not buying gold to make a profit, I’m buying gold as a hedge and I hope I’m wily enough to make money someplace else… it’s just I don’t know how right now.

And some people are opting for their matresses. Retiree Margaret Cline Harmon moved her savings out of stocks about 9 months ago. If she hadn’t, her portfolio would have lost more than half its value. She says, she won’t venture back into the market anytime soon:

Margaret Cline Harmon: I really don’t think it’s going to be safe to put your money in it for 5 or 6 years, but once is stabilizes, I might.

Micahel Farr is chief investment officer of Farr Miller and Washington. He says there aren’t a lot of Margarets out there… yet.

Micahel Farr: These emotional mindsets evolve. I think that things could get worse.

Farr says people shouldn’t indulge their fears. He says this slump may last for a few years, but the markets will recover.

Farr: Be dispassionate and think about the long term. And if you don’t look now, that would be a really good strategy.

Also known as the ignorance is bliss strategy.