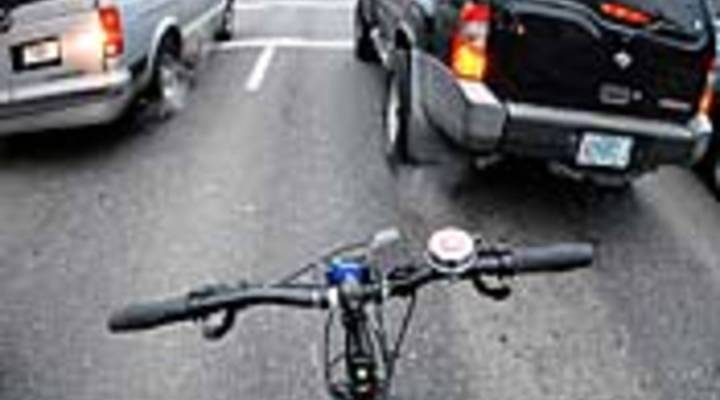 Portland’s support of cycling pays off

Portland’s support of cycling pays off

TESS VIGELAND: Imagine San Diego as one big peloton today. Thousands of cyclists are converging there for the Bicycle Leadership Conference. They’ll be figuring out how to expand the bicycle market.
One obvious answer: get more commuters to ride bikes to work. On that score, Portland, Oregon, is way out front of the pack. According to Bicycling Magazine, the city has the highest number of bike commuters in the country.

Ethan Lindsey, of Oregon Public Broadcasting, reports on the industry that’s grown up around all those riders.

ETHAN LINDSEY: Too many bicyclists. Portland is the closest an American city has come to getting it right. The city has bike boulevards, bike passing lanes, even bike traffic jams, and on Sunday nights it has ZooBomB.

ZooBomB is a weekly race down one of the city’s biggest hills. Of the 40 or so racers, about half bomb the hill on tricked out kiddie bikes. Yet this is only one spoke in Portland’s bicycle culture. This city has been considered one of the most bike-friendly in the country, ever since the 1970s. That’s when lawmakers passed Oregon’s “bicycle bill,” sending 1 percent of all road money to bicycle infrastructure.

JONATHAN MAUS: So once infrastructure that made biking safe and feasible and possible was there, people started doing it in greater numbers.

MAUS: It’s just sort of a big snowball. Now people move here because it’s safe for bikes and it’s possible to live without a car, and out of that you start essentially creating markets, markets that don’t exist in other cities.

Maus points to fears of gas prices and global warming. He says those car concerns could help Portland become a capital city in the bike business. In a report for the city last year, a planning firm estimated the bike industry employs 600 to 800 people at about 125 different companies. Maus, the blogger, says Portland is in the process of attracting even more bike companies, including some bigger names with larger payrolls. Yakima Products is one of the world’s biggest makers of bike racks. It employs almost 100 people. About 10 years ago, the company outgrew its original offices in Arcada, California. Chris Sautter is a developer with the company. He says the Portland area seemed an ideal new home.

CHRIS SAUTTER: There’s a large group of people and industry that know about bikes, or if they don’t know they know somebody who does. There’s a knowledge base.

Sacha White builds high-end bikes by hand at his small Portland shop. Many say his bike frames are the best in the world, which is why they cost $10,000 each, and there’s a five year waiting list.

SACHA WHITE: I’m still the sole builder. I want to be that kind of village craftsman, you know, where back in the old days people in the community were coming to the knife maker for a knife.

White says he doesn’t want the city to grow so big that it becomes the Detroit of the bicycle age, but in the meantime, Portland continues to be home to more and more bike riders, and with more riders come more shops, more jobs and more injuries.

ZOO BOMB BIKER: If you crash, yeah don’t die. Get out of the way so no one runs you over. Follow us; you’ll get to the bottom. It’ll be sweet.

TESS VIGELAND:
We have some video of that downhill race that Ethan mentioned on our website. It’s Marketplace.org.