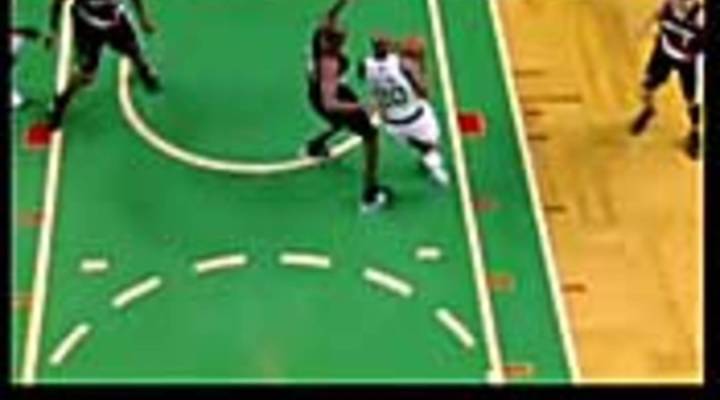 TESS VIGELAND: Here’s another thing you might not want to download if you’re paying based on bandwidth — a four hour baseball game. But while that cost is currently part of the package, sports leagues are still figuring out the best ways to get their content to digital users. Earlier this week the Sports Business Journal reported that the NBA is going to allow its teams to sell their own digital rights. To explain further we’ve invited Ed Derse, our business of sports commentator who also happens to be the Vice President of Interactive Media for Fox Sports International. Hey Ed.

VIGELAND: So tell me how this works. This is essentially the local teams: the Blazers, the 76ers, the Clippers able to put their own games on the Internet.

DERSE: For the most part that is exactly correct. What the NBA is planning to do is grant the teams, the local teams, the rights to exploit the digital rights for their local games. Now remember, the NBA just completed an extension of its national rights deals with ABC, ESPN and TNT — eight years at $7.4 billion, and part of those rights deals was the ability to exploit the games on all platforms possible, including social-content platforms. So you could see in a couple years ESPN allowing people to do NBA match-ups for example

VIGELAND: Is this a surprise that a league would actually go for this strategy?

DERSE: No, I don’t think it really is a surprise. I think that the NBA is looking down the road a little bit, and it, you know, aligns with their broadcast rights strategy. They’ve got their national deals, they have their local deals, and they want all of the rights, both traditional broadcast and the digital rights, to align with each other and offer them as single packages to regional sports networks, or anybody else that might come along. It does differ from the existing models that you have.

VIGELAND: Yeah, well let’s talk about that. Major League Baseball, the NFL do not do this.

DERSE: No, MLB and the NFL, through their digital arms, have owned and controlled the digital rights exclusively. So the NFL, for example, has an exclusive rights deal with Sprint, and all of the mobile highlights go exclusively to Sprint, but the NFL, the league itself, controls that. Not the teams and not the broadcasters.

VIGELAND: What is the advantage of the NBA model now?

DERSE: Well I think there are a couple things. First let’s look at the local aspect. About 142 games that go to ABC, ESPN and TNT, that leaves about another 850 games over the course of the season to be exploited, and the league, rightly so, realizes that the local teams are the best people to promote whatever products they have, whether it’s the basketball team itself, some kind of promotion, or the digital rights. It also provides additional or protective value, if you will, for the teams when they’re trying to negotiate these kinds of deals with their regional sports networks, because now you don’t have digital rights out there competing with, you know, the television rights. You align them together and it’s a better financial proposition for the teams.

VIGELAND: What do you think? Is it a good model?

DERSE: Well, from a broadcaster’s point of view, and I work for a broadcaster, I think it’s a good model. It’s a logical one that aligns the interest of the broadcasters and the leagues themselves. When you start to parry these things out in a convergent world, where people really do consume on multiple platforms, the technology is now reaching mass adoption to consume via broadband, but the business models really aren’t the same. The digital rights are worth tens of millions of dollars, and the broadcast rights are worth billions of dollars. So if you have everybody able to consume on digital platforms for rights that go for a lot less, you’re going to threaten the more valuable rights that come with your core broadcast deals.

VIGELAND: Do you watch the Lakers on a two-inch screen?

DERSE: Do I watch the Lakers? I watch a lot of stuff on a lot of screens. I mean, look, if I have the choice to sit and watch a game in front of my television “set” or on my laptop or on the iPod, most of the time, given free time I’ll watch it on the television, but I move around a lot. I travel a lot, and so do a lot of other people, and the younger consumer adjusts his expectations of the size of the screen, and increasingly prefers that mobility over being forced to sit down and be tied to a television set.

VIGELAND: Ed Derse is the Vice President of Interactive media for Fox Sports International, but when he comes and visits with us his views are his own.