BOB MOON: China’s foreign minister is in Africa this week to discuss trade and economic deals. Africa’s copper, iron ore and oil are helping feed China’s economic growth. In fact, last year, trade between China and African countries jumped more than 30 percent. It works both ways: A growing class of Chinese entrepreneurs are running small businesses in Africa. Including Lesotho, one of the poorest countries in the world. And as Gretchen Wilson reports, that area has become a flash point for new tensions between local Africans and Chinese businesspeople.

GRETCHEN WILSON: Motsekuoa is a town with a dusty main street and epic mountain views. It’s like the Old West…. The trading post is a general store run by a family of Chinese immigrants. Chinese make up less than 1 percent of Lesotho’s population of 2 million. But in even the tiniest town here you’ll find a store run by China’s aspiring business class.

These family-owned businesses are known as “China shops,” and they offer everything from cornmeal and cooking oil to dish towels and padlocks — all at rock-bottom prices. But the economic success of these Chinese traders has a dangerous effect.

In the capital Maseru, 59-year-old Mathabo Mabekhla sells wood carvings and jewelry on the sidewalk. For 14 years she owned this city’s most successful ladies clothing boutique. But she says she closed down last year because she couldn’t compete with Chinese retailers.

MABEKHLA: Chinese are selling very cheap, and not quality things. So [people] go for those cheap things because the economy in this country’s dying.

Mabekhla is one of many informal traders who blame the Chinese for driving them out of business. In November, traders in the capital went on a rampage — throwing stones at Chinese grocery stores, clothing shops, and Internet cafes. Riot police restored calm. But tensions remain.

MABEKHLA: The Chinese they must go back home. Back to China. We don’t want Chinese here.

Some opposition politicians and radio stations play up this anti-Chinese sentiment, making them easy targets.

MARTYN DAVIES: This is certainly a potential flash point.

Martyn Davies is director of the Centre for Chinese Studies at Stellenbosch University. He says that as China increases its presence across Africa, hostilities flare up when stoked for political ends.

DAVIES: This is certainly a risk, I think, for Chinese business and Chinese people in Africa, and one which needs to be very carefully managed by African governments and also perhaps through intervention or involvement by the Chinese government themselves.

‘Mabaedsi MATSAMAI: We do need investment. And we do encourage foreign direct investment. If we didn’t, probably we wouldn’t have any investment, if we were just saying, “only local.”

But Chinese retailers have the built-in advantage. With their links to China, they’re plugged into the global economy in a way the Basotho aren’t. That puts Lesotho in a bind — one faced by developing countries around the world: How do you draw foreign investment without driving your own citizens out of business?

Lesotho’s business leaders say the government should train local entrepreneurs to compete as the global economy comes to their doorstep. Thabang Mokatse is with the Lesotho Chamber of Commerce.

Thabang MOKATSE: If no steps are being taken, in no time, the whole economy will be in the hands of the Chinese.

But Chinese business owners say the formula for success is simple.

Chen Ke Hui is chairman of the Chinese Business Association of Lesotho. Key to his success has been his ability to integrate here. He speaks Sotho better than English, has a Sotho name (Thabiso), and is an honored guest at his employees’ weddings and funerals. He says he personally doesn’t feel any resentment from local people.

CHEN: You know, African people is nice people! We are here together!

In fact, Chen and his family have traded in their Chinese passports to become naturalized citizens of Lesotho. But in this frontier of globalization, some of their new compatriots see them as competitors. 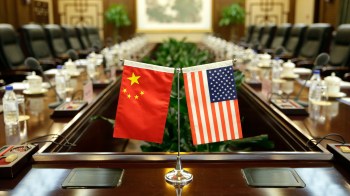