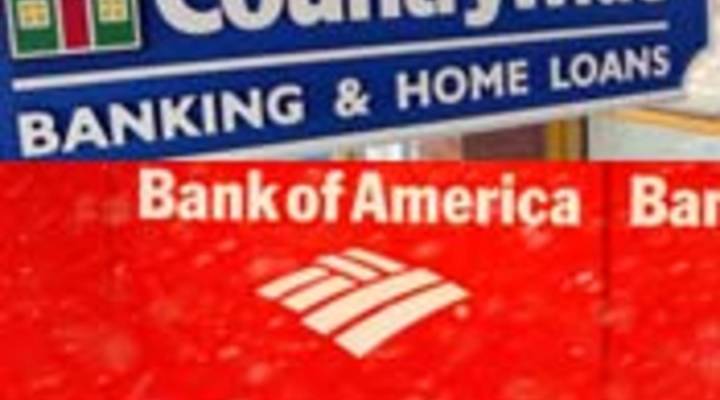 For Countrywide, B of A is in the house

For Countrywide, B of A is in the house

TESS VIGELAND: Several reports out today say Bank of America is in “advanced talks” to buy Countrywide Financial, the nation’s largest mortgage lender. A buyout — first reported by the Wall Street Journal — would be yet another signal that Bank of America sees something in Countrywide that others don’t.

B of A already injected $2 billion into the mortgage company back in August as the subprime credit crunch hit. But just this week Countrywide’s stock plummeted on renewed rumors that it might be on the verge of bankruptcy.

The company says foreclosures and late payments on its mortgages hit record highs in December.
We asked Chris Thornberg of Beacon Economics what the attraction might be for B of A.

CHRIS THORNBERG: They’re looking out into the future. They think there’s a high likelihood of Countrywide going bankrupt. So they sort of have a choice at this point in time. Do you want to become a creditor later on? Or just move in right now and take over the organization?

Countrywide lost $1.2 billion in the third quarter of last year. It has stopped selling subprime loans but still holds hundreds of thousands of mortgages and bank deposits.

Thornberg says a buyout would have minimal effect on Countrywide customers. Bank of America and Countrywide have not returned our calls.

The Journal reported a deal could be announced … “soon.”