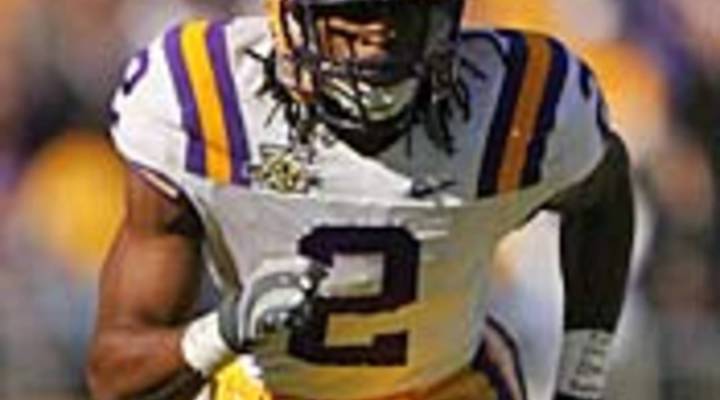 Should colleges sell an athlete’s image?

Should colleges sell an athlete’s image?

As the name implies you’re going to see plenty of Allstate ads and sponsorship mentions along with your football. You’re also gonna get NCAA-approved ads for Pontiac and Enterprise Rent-a-car. One thing you’re not goign to see, though, is current college players plugging those products. From Oregon Public Broadcasting, Ethan Lindsey explains why, and why that might change soon.

ETHAN LINDSEY: The National Collegiate Athletic Association, or NCAA, has strict bylaws banning a school from profiting off a student-athlete’s name or image. That’s why you’ll never see a current college athlete pitching, say, Gatorade. But those rules would change under a proposal currently being discussed by the NCAA.

Bob De Carolis is the athletic director of Oregon State University in Corvallis, Ore. De Carolis says right now he’d vote no on the plan to allow sponsors to use an athlete’s image.

Bob De Carolis: It just borders on some things that will open up some other doors that you might not want to go in at this point in time.

Skepticism like his postponed a planned January vote on the issue. But the college board says it will push forward for an eventual decision. The NCAA already makes tens of billions of dollars in TV contracts and commercial sponsorships. But student athletes are considered amateurs and so are banned from receiving any salary or gifts related to their play.

Critics say the new rule change is just another piece of that big-money commercialism seeping into amateur athletics.

De Carolis: Yeah, it’s just one more step. The NCAA should be kind of the lead on the thing, and they are actually kind of trying to back-door the system here a little bit.

De Carolis says he thinks the NCAA is already breaking its own rules. That’s why it is pushing so hard for this rule change. Take this in-game ad.

Under a marketing deal, the NCAA gets millions of dollars from Pontiac. In exchange, Pontiac awards a “game-changing performance” play every week, using the video and images of the week’s best collegiate football plays.

Mark Roundetree is the associate athletic director of compliance for Oregon State.

MARK ROUNDTREE: I’m that person who ensures that the institution is following those rules regarding recruiting, regarding amateurism, regardign financial aid.

Roundtree actually works for De Carolis. But he says he thinks the proposal is a good idea. Recently Roundtree sat down with a group of athletes to discuss the possible rule change. He says some of the athletes actually like the idea of having their name up on a billboard or on a box of cereal.

Still, the students voted against the rule change, because they wanted to have veto power over the products and services they were associated with. For instance, a vegetarian soccer player may not want to be on a poster advertising McDonald’s.

Kyle DeVan is not that guy. He’s a 300-pound senior offensive lineman for the Oregon State Beavers football team. But he says there’s a discrepancy between schools getting more and more cash from sponsors — all while he and his teammates continue to scratch by on little more than scholarship allowance money.

KYLE DEVAN: You know, I think at times it feels like we should be paid more than we are. I’d like to see the money go up a little bit more. That way we’re not putting together a couple of bucks just to go get a burger or something like that.

Everyone involved promises that the rule change will not put more money in student athletes’ pockets. And players like DeVan say that may be the problem.