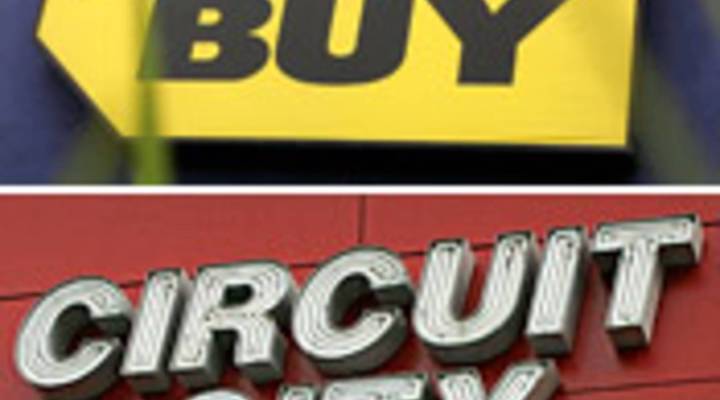 A tale of two electronics retailers

A tale of two electronics retailers

KAI RYSSDAL: Here’s a tale of two companies. They sell the same stuff. The actual stores even look kinda similar. But they couldn’t be more financially different. Best Buy is going gangbusters. Profits have soared and sales are way up. Circuit City can only wish. Shares there gave back 28 percent today — they’re down 75 percent so far this year. And things are expected to get worse. We asked Stacey Vanek-Smith to find out how the two companies wound up in such different places.

STACEY VANEK-SMITH: Consumers have been tight with their money this holiday season. But industry analyst Paul Nolte says there is one thing people still seem willing to splurge on.

Paul Nolte: A lot of the electronics, the flat screen, a lot of the gaming and that type of stuff is really what’s moving at this point in the marketplace.

That should mean the best of times for electronics retailers. It certainly has been for Best Buy. Strangely enough, though, it’s been the worst of times for Circuit City. Investors dumped their shares today after the company reported flagging sales and losses that were even greater than expected.

Industry consultant Burt Flickinger says it all comes down to customer service. And where Best Buy has invested in its website and the Geek Squad, Flickinger says Circuit City has taken a flawed “less is more” approach.

Burt Flickinger: Circuit City seems to be following a regrettable retail model: To increase cash flow, one cuts costs, so cuts inventory, cuts staff. You can get away with it for a couple years, but eventually the shopper sees that the store is not up to the same standards.

And, says Flickinger, once those shoppers leave, it’s very hard to get them back.

Flickinger: It costs $6 for every $1 of lost sales to try to get that consumer to come back, and even then your chance of success is only 50 percent.

Circuit City has also lost several executives this year. Earlier this week the company approved millions of dollars in cash incentives to keep the top managers who are still with the company.

What if delivery vans took your stuff away instead of dropping off packages?