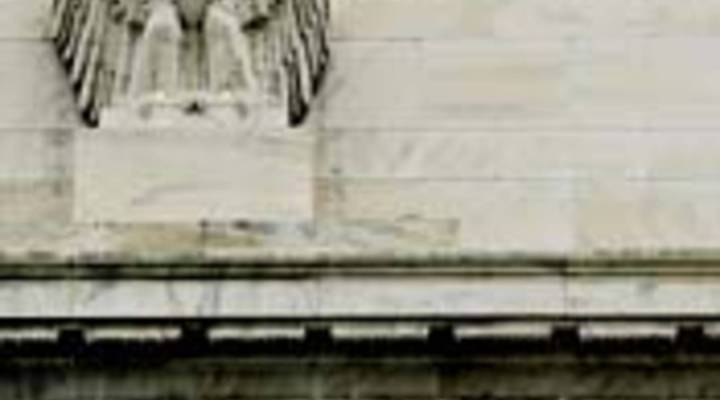 Fed cracks down on mortgage lending

Fed cracks down on mortgage lending

Tess Vigeland: A small and probably short-lived reprieve from the dismal housing news this week. Foreclosure filings actually fell in November. Small comfort for anyone in Stockton, California, where the foreclosure rate is the highest in the nation at one in 99 homes.

President Bush signed a bill with relief for homeowners who are able to do a short sale. They will no longer owe taxes on the mortgage debt that is forgiven as part of that transaction. And the Federal Reserve stepped in with proposals for a crackdown on some of the shady lending that helped create the mortgage crisis.

Marketplace’s Nancy Marshall Genzer joins us from Washington to break it all down. Hey, Nancy.

Vigeland: So what did the Fed exactly propose in terms of cracking down on lending practices?

Genzer: Well Tess, one thing they’re going to do is they’re going to outlaw something that’s been called a “liar loan”. Tess, you could actually sit down with a loan officer and say, without any documentation: “I’m Tess Vigeland, I make a half a million dollars.”

Genzer: They wouldn’t require any proof of that. So that’s no longer going to be allowed. Also, lenders are going to be prohibited from engaging in a pattern of lending to borrowers who cannot afford to pay a loan at its higher rate. That seems to be pretty much common sense — if a borrower can’t afford to pay, then you shouldn’t give him the loan! Also, one thing that they’re doing is they’re going to sort of crack down on pre-payment penalties, but they’re not going to ban them altogether. This is where, Tess, you’ve got this loan, you don’t make a half a million dollars a year, let’s be honest. So you go out, you get that lower interest rate loan, you pay off the first one that you lied to get and they penalize you for that by thousands of dollars. Now they’re still going to be allowed to do that, but you’re going to have about a two-month window where you can prepay that expensive loan you lied to get and you won’t be penalized for it. But it’s only a two-month window.

Vigeland: Does this do anything to help those who are already facing foreclosure?

Genzer: No ma’am, it doesn’t. This only applies to new loans.

Vigeland: What kind of other proposals are out there to deal with the lending industry? I already saw this week that a lot of folks are saying the Fed action is way too little, too late.

Genzer: Yeah, and some members of Congress are saying that. One thing members of Congress, especially Democrats are very upset about this prepayment . . . I want to read you one choice quote from Barney Frank, now he’s the Democrat from Massachusetts that chairs the House Financial Services Committee. He says: “We now have confirmation of two facts: one, the Federal Reserve system is not a strong advocate for consumers, and two, there is no Santa Clause.” Kids who are listening, I have no idea why Barney Frank had to drag Santa into this, he was only kidding of course.

Vigeland: All right, well you mentioned Santa Clause. One thing that Congress did put back into the stockings is it did come up with a fix for the alternative minimum tax. Now what did the IRS do, because they’re really late on having to get this into the system, right?

Genzer: Yeah, the IRS is not happy with Santa at all. The IRS says, because Congress dithered back and forth, well guess what? That’s gonna stall your refund. It could stall refunds for more than 15 million taxpayers. The IRS has said it needs about seven weeks from the enactment of this leglislation to adjust its computers to the change, so you’re just gonna have to wait for your refund.

Vigeland: All right, a bit of a lump of coal, then. Thanks so much, Nancy.

Vigeland: Nancy Marshall Genzer, one of Santa’s elves, joining us from our Washington, D.C. bureau.