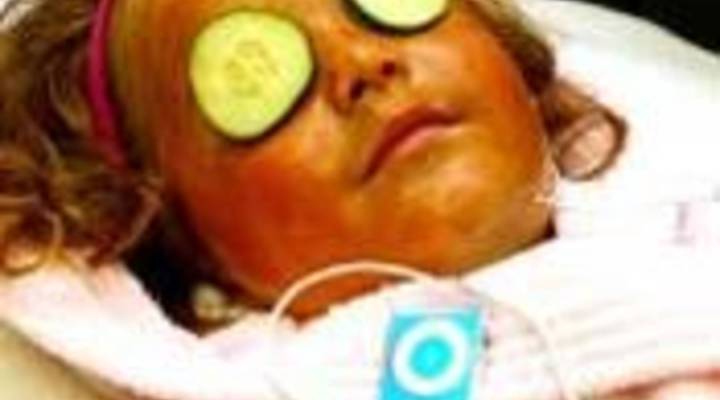 Spas give kids the treatment

COPY
A girl at Spa di da with cucumbers on her eyes. Spa di da website

Spas give kids the treatment

KAI RYSSDAL: Every now and then you run across an item in the news that just makes you say, “Oh, c’mon.” This next one might be it for you. It sorta was for me. It seems pampering — as in manicures and facials — knows no age. There are nearly 5 million pint-size primpers hitting spas every year in this country. And the budding self-indulgent set is also hoping for spa toys under the Christmas tree. Stacey Vanek-Smith has the story.

STACEY VANEK-SMITH: Six-year old Christopher Tanquery is soaking his hands in a bowl of green slime. Nope, this isn’t one of those science-is-fun classes. Chris is getting a manicure.

Actually, he’s getting the rock-star manicure/pedicure at Spa Di Da, a spa that caters to kids in Los Angeles. His mom, Maria, says she loves bringing Chris here.

MARIA: It helps them realize that you do need to take care of yourself. You know, you get your hair cut and you do your nails and you feel good about yourself.

It’s hard not to feel good — or at least hungry — when you see the list of Spa Di Da’s treatments. There is the chocolate kiss facial for 60 bucks, a $25 pink lemonade pedicure. And, for $40, a luxury cupcake pedicure that includes an actual cupcake.

April Weiss is the spa’s director of operations.

April Weiss: We found a lack of salons that are offering quality services for kids. So the idea started there and then evolved into “Well, why not make a place where they can go and get really special manicures and pedicures and facials.”

The spa industry is worth $11 billion in this country, and the number of spas in the U.S. has tripled over the last seven years. That kind of growth can spell market saturation. So at the International Spa Summit this year one of the major points of discussion was how to tap into newer markets — like kids.

Lynn Walker McNeese is president of the International Spa Association.

Lynn Walker McNeese: When you think about one in four American adults have been to a spa, there’s a lot of children that are exposed to that through their parents.

Even educational toymaker Scientific Explorer has options for the mathematically-minded princess. Including a spa chemistry set where kids make their own bath bombs. Company founder Susan Rives says the spa kits were a no-brainer for getting girls interested in science.

Susan Rives: Spa products are a huge, huge trend right now. We also knew that tweens were interested in this from market research that we did.

Rives says the kits are some of the company’s best-sellers. And all things spa are poised to grow even more in 2008. ISPA president Lynne Walker McNeese says historically economic downturns have spelled boom time for spas.

Walker McNeese: The number one reason people go to a spa is to reduce stress. When the economy slows down and times are tough, we’ve got more stress.

And adults aren’t the only ones who need a little stress relief these days. Back at Spa Di Da, 13-year-olds Sira and Amina are getting their monthly treatments.

SIRA: We’re getting a manicure and a pedicure done.

The girls say they like the relaxation that the spa has to offer.

AMINA: Depending on if there’s drama in school or not.

SIRA: Our school is pretty stressful.

With COVID-19, hotels have to rethink safety for when guests return 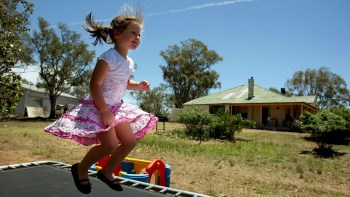