Renita Jablonski: My parents in the cold and snowy Midwest say they just can’t seem to get motivated to finish putting up the Christmas lights outside. They joked to me that people in Los Angeles must have an easier time stringing bulbs in the sunshine and 60’s rather than in 30-degree temperatures.

Oh Mom, I said, things are different here. You can just order up some holiday cheer. It’s not cheap, but it is in demand. Here’s more from Lenora Chu.

Lenora Chu: Bob Pranga first started decorating homes for the holidays as a survival job between acting gigs. But business quickly took off, and these days he goes by the name Dr. Christmas.

Bob Pranga: Anybody who’s requiring Christmas from A to Z, that’s what I do.

Pranga and his team do it all — from stringing your rooftop lights to trimming your tree Art Deco style. Burn out a bulb between Thanksgiving and New Year’s? A technician will pop in and fix it.

Pranga likes to say he gives people their time back.

Pranga: Everybody thinks that, you know, L.A.’s a big, you know, lazy playground for the rich. And it’s really not, because for a majority of people here, it’s a factory town. I mean, these people are working all the time.

Pranga says he’s even saved a few new marriages in the process.

Pranga: It’s that first year of kind of letting go of your control issues and kind of making this a two-party deal rather than a one-party deal. I have to remind people that Christmas is, you know, supposed to be an enjoyable time of the year.

Decorating services aren’t cheap. Mini-lights on your roofline with window trimmings and a wreath on your door will cost at least $1,500.

Toss in green LED-lighting and indoor styling for a mansion, and you could be paying the bill ’til tax season, says Deloitte Services retail expert Jackie Fernandez.

Jackie Fernandez: The amount someone can spend can go up to probably $20 [thousand], $25,000, depending on how much you’re going to do, how big your house is, how extravagant, you want in and out, all of that.

Even so, more people across the country are hiring holiday help, especially in urban areas.

But in L.A., it’s more about status than it is in Ann Arbor, says Pranga.

Pranga: Because in the Midwest, if you find a bargain, it’s a good day. In L.A., if you don’t pay a lot for it, it’s not worth anything. But the overall message is still for everybody, yes.

Fernandez: These services are going to keep growing because of the demand, which will drive prices down and that — I believe this will therefore push it more into the mainstream than keeping it as a luxury item.

Fernandez herself is spending $500 to decorate her roofline with icicle lights. That keeps her husband off a ladder and safely inside. 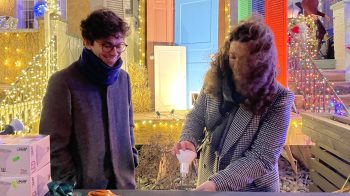