NFL a touchdown this TV season

NFL a touchdown this TV season

Scott Jagow: But who needs Hollywood writers to come up with new TV drama, when you have the NFL? One team hasn’t lost. Another team hasn’t won. You have wonder-boy quarterbacks and a coach running up the score. And unfortunately, prison sentences and murder, all this season. Couple weeks ago, Monday Night Football was the highest-rated cable program in history.

Let’s bring in our business of sports commentator, Diana Nyad. Diana, love ’em or hate ’em, it’s all about watching the New England Patriots, isn’t it?

Diana Nyad: That’s what so, you know, phenomenal about the Patriots, especially, you know, drawing these huge television ratings on games where they’re, you know, whooping people up. And it’s kind of what I call the “Tiger factor.” We always say, hey, you’ll watch anything if it’s close, but, you know, if it’s going to be a blow-out, I don’t care how good the team is, you don’t watch. Well, you watch Tiger. Well right now, that’s what the Patriots are. They’re magic. They walk on the field, and the silver glances off the, you know, the sun glances off they’re helmets.

Jagow: Yeah, yeah. But I understand what you’re saying, because it’s hard to turn away. It’s hard not to watch and see if they can run up the score to 100 or whatever. And that has fueled the TV ratings, as you’ve said. But at the same time, the NFL has had lots of problems this year with Michael Vick, and then you had the shooting, the death of the Washington Red Skins player. Has this come at the exact right time for the NFL in terms of keeping people glued into it?

Nyad: I think so. I think, you know, nobody would have wanted to step into Roger Goodell’s shoes this year as a, you know, fairly new commissioner of the NFL, as you start with Michael Vick alone. You know, Goodell, you know, was up there, you know, just about every week having major press conferences, apologizing for this, disciplining for that. And then all of a sudden, it’s not only the Patriots we’re talking about, but look at Brett Favre. In terms of popularity, I don’t know if we could name an athlete on the planet right now. He’s as popular as Muhammad Ali was in his hey day. You know, he’s like a little boy still playing pop warner football at age of 38. And then Tony Romo of the Dallas Cowboys last year blew the entire Cowboys’ season with one fumbled snap. Now, he’s like Mr. Star Celebrity of the Cowboys, and the Cowboys with Terrel Owens and him are on fire. So there are these, you know, wonderful, huge, looming big stories that have just about evened out the negative Michael Vick stories, I think.

Jagow: But we should point out that if the Patriots do get to 15 and 0, they play the Giants the last game of the season — and that game will be on the NFL network, which is not carried in a lot of cable systems.

Nyad: As a matter of fact, you know, most households, you know, do not get the NFL network. And the NFL network just refuses to budge on this. You know, they’re saying to Comcast and other cable outfits, carry us, take us off your premium sports packages, give the NFL network for free. Comcast and the others say hey, we do business. And the NFL says, well you know what, you look forward five years, you’re going to see every game — it’s all going to be on the NFL network. Everybody’s going to have to pay for it, and we’re starting that right now, but what a shame to have this historic game, for us to not get to watch that? It’s just wrong. The NFL should just give it over to Fox that weekend.

Jagow: All right, Diana, thank you. 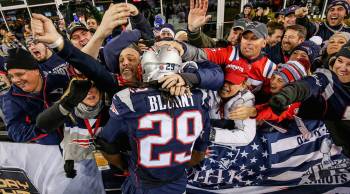 After election stress, movie-going and NFL ratings are up