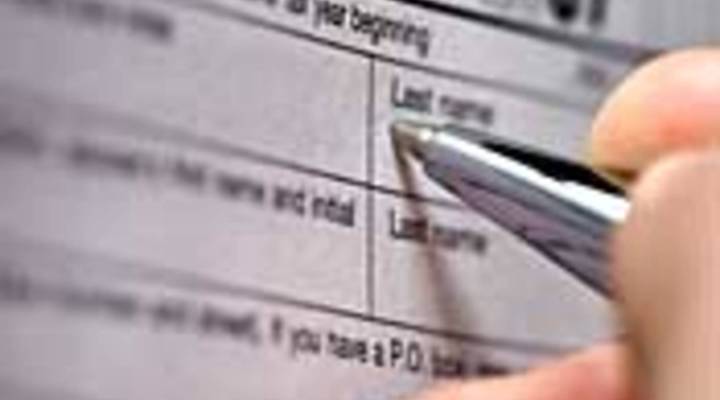 KAI RYSSDAL: From retirement to taxes we go. Congress and the White House are still trying to come to terms on a deal to fix the Alternative Minimum Tax. The House wants to find a way to replace the revenue that would be lost with an AMT patch. The Senate says fine, but you’ve got to do it with no new taxes. Caught in the middle is the humble taxpayer. More than 25 million of us could wind up owing an average of 2,000 extra dollars come April 15th. Also squeezed is a group it’s often hard to feel sorry for — the Internal Revenue Service. Tess Vigeland covers personal finance for us. Hey Tess.

RYSSDAL: So the politicians are having their way, sort of, with the tax code here. How long before it becomes an actual problem?

VIGELAND: At least for the Internal Revenue Service. The IRS Oversight Board actually raised a red flag about all kinds of problems that are going to be caused because of the delays in resolving this issue. There’s the most practical of them all. Which is that it takes time to program the computers that go over our tax returns. If the tax law changes, they say that re-programming can take upwards of seven weeks. Now right now tax filing season is scheduled to start on January 14th, but that could be delayed until at least late January. Possibly later. What that means is if you’re planning on a refund to say, pay for your holiday shopping activities, potentially it’s going to be several weeks late in getting to you.

VIGELAND: They say that their systems actually need to be based on whatever the current law is.

VIGELAND: Instead of speculative law. And, you know another question that’s come up is, you know can’t you tell if a return is supposed to be subject to the AMT or not?

VIGELAND: Well, the answer is no. The system cannot tell the difference between those kinds of returns, and frankly that’s not really a surprise because how can the computer tell when we as taxpayers often can’t tell until after we’ve completed our returns, and oh surprise, you know, you’re subject to the AMT.

RYSSDAL: Yeah. Worse case here. What happens if there is no fix?

VIGELAND: Well we could potentially go back to paper filing, but again that causes a problem because so many of us have actually switched to electronic filing already, that the IRS has closed down some of its processing sites. Right now it only has five, so the oversight board is saying that as electronic filings would drop, that would create weeks-long backlogs. And you know if there is no AMT fix, well then the IRS is basically ready to go, but that also means that some 25 million tax payers are going to fall into the AMT, and that’s up from just 4 million last year. I shouldn’t say “just,” but 4 million last year, and that is a whole lot of angry taxpayers in an election year.

RYSSDAL: And so we’re back to where we started, which is politics and the tax cut.

VIGELAND: Yup, and you know there really is no indication at this point of when they might pass a fix.

VIGELAND: Always a pleasure to talk about taxes, Kai.