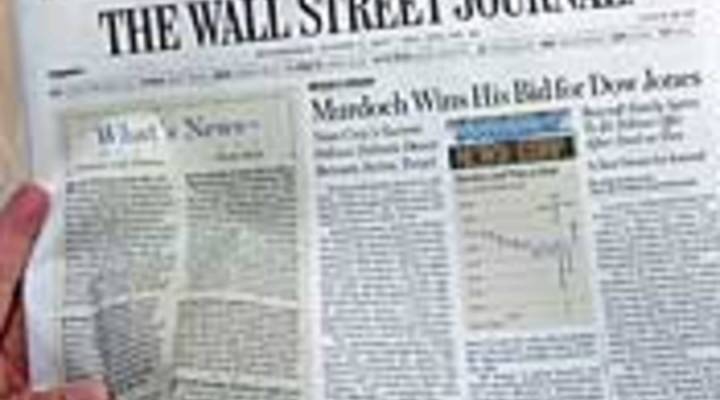 Murdoch will change WSJ, but how?

Murdoch will change WSJ, but how?

KAI RYSSDAL: It’s all over but the voting for Rupert Murdoch and the Dow Jones Company. Dow shareholders — that’s mainly the Bancroft family — are expected to formally approve the takeover by Murdoch’s News Corp tomorrow. They’ll get $5 billion in exchange for giving up the Wall Street Journal. Stacey Vanek-Smith takes a look at what’s in store for the companies and the paper.

STACEY VANEK-SMITH: News Corp is the third largest media conglomerate in the world with revenues of nearly $30 billion. It owns Fox News, HarperCollins, MySpace and The Times of London among other things. Still, the Wall Street Journal was a special score for CEO Rupert Murdoch.

JOHN CASSIDY: It’s the newspaper he reads when he gets up every morning. I think he’s had his eye on it since he moved to America.

John Cassidy is a staff writer for The New Yorker, who has profiled Murdoch. He says Murdoch is already making the Journal his own.

CASSIDY: From all I hear, he’s very excited about taking it over. He’s already down there walking around the newsroom meeting people.

And making changes. Word is Murdoch will beef up the Journal’s coverage of arts and politics to directly challenge The New York Times. He’s also expected to make the Journal’s website free. The changes are being watched closely. When Murdoch’s News Corp made the bid for Dow Jones last spring, many critics viewed the deal like this:

DARTH VADER: Join me and together we can rule the galaxy!

After all, The Wall Street Journal is one of the most respected papers in the country. And Murdoch is known for injecting his politics into coverage at Fox News and The New York Post. Jeff Jarvis writes media blog Buzzmachine.com. He predicts Murdoch will be more prudent with the Journal.

Jeff Jarvis: My faith is not in Murdoch’s journalism. My faith is that he’s too smart to turn the Wall Street Journal into Fox News.

Jarvis says Murdoch paid a premium for the Wall Street Journal’s reputation and he has big plans to leverage that asset. Jarvis says Murdoch will invest in the brand’s future, and when he bought it, ad revenue at the paper was flat.

JARVIS: The Bancrofts, who of course had owned it, they weren’t managing, they weren’t investing. Here’s someone who really wants to invest in the future of the Wall Street Journal as an international omnimedia brand.

Tom Rosensteil is the director for the Project of Excellence in Journalism. He says Murdoch is one of the few people who has a real vision for the news business.

Tom Rosensteil: Rupert Murdoch sees the news as an emerging industry and he sees newspapers as the core of that because they provide the content that will be distributed in these new ways.

In fact, Murdoch’s purchase of Dow Jones is a lot like the deals he made for Fox Studios and MySpace, where he paid a big premium. Hal Vogel heads up Vogel Capital Management, a media investment firm. He says News Corp is making a good bet.

Hal Vogel: They will probably see a pretty good return on their investment, but it will take time. And that is not atypical for Rupert Murdoch. He’s willing historically to lose a lot of money initially and then see it come back in a very strong position in a few years.

The New Yorker’s John Cassidy acknowledges that Murdoch might make purists cringe. But he says the Australian-born Murdoch is also one of the few moguls willing to invest in the flailing newspaper business.

CASSIDY: Murdoch always strikes fear into the hearts of a certain type of American journalist because he isn’t a sort of hands-off, American-style proprietor. But given the climate we’re in now, I think people might think slightly differently about Murdoch.

And Murdoch may be thinking slightly differently about Dow Jones, too. Buzzmachine’s Jeff Jarvis says the 76-year-old sees the Wall Street Journal as his legacy. And he’ll do everything in his power to protect its reputation.