KAI RYSSDAL: It was a rough day on Wall Street, but the New York Stock Exchange is always looking for new business. Today the Big Board opened an office in Beijing to tap into the booming Chinese equity market. Treasury Secretary Henry Paulson was on hand for the ceremony. He’s in China for the next round of economic talks. Meanwhile, today brought another sign of potential overheating in that economy.

STEPHEN GREEN: The fundamental issue is this economy’s too liquid. That needs to change, and one of the only ways that can change is on the exchange rate.

ANDY XIE: In Japan it took ten years. I doubt it will take less in China, so we’re lucky if China has a convertible currency by 2015.

China is moving on other fronts. Today the two sides signed a product safety deal on Chinese food and drug exports.
And Beijing may grant more market access to western investment banks and stock funds. Still forecaster William Hess, of Global Insight, doubts China will give away the store to a lame-duck U.S. administration.

WILLIAM HESS: Given the uncertainty in the political climate in Washington, to give something to Paulson now may not carry the same weight as it would later. 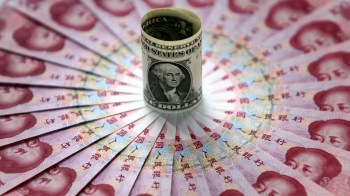 Just how much is the trade war hurting China’s economy?