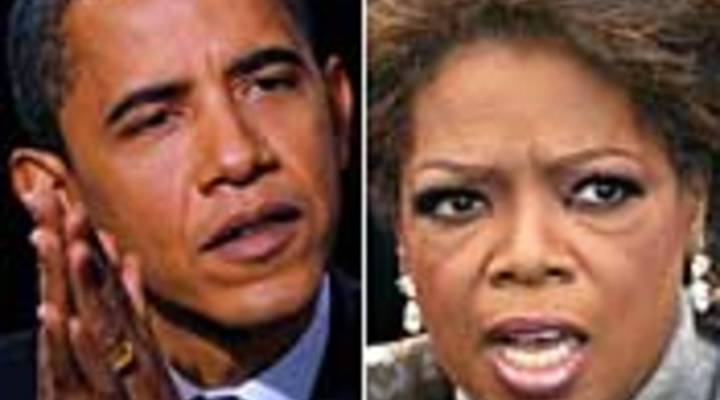 Kai Ryssdal: Hillary Clinton’s going to be in southern Iowa this weekend. John Edwards will be shaking hands all over the great state of New Hampshire. Barack Obama is headed for Des Moines and parts of South Carolina. Obama’s wife Michelle will probably be at his side, as will Oprah Winfrey.

Of course, celebrity endorsements of political candidates are nothing new, but we all know that Oprah is more than just another celebrity, right? So we asked Stacey Vanek-Smith to take a look at what happens when brand Oprah chooses sides.

Oprah Winfrey: America, you are wearing the wrong bra…

Stacey Vanek Smith: It’s the call to action that sold a million Le Mystere brassieres, turned Josh Groben’s Christmas CD platinum and landed Anna Karenina on The New York Times best-seller list. But can Oprah do for Obama what she did for Tolstoy?

Steven Ross: If I were running for president and I could pick one celebrity in America to endorse me, it would be Oprah Winfrey.

Ross: She has the potential of reaching out into a group of voters who never vote. We know from both the last two presidential elections that 1 to 2 percent of the vote in key states could potentially turn an election.

More than 8.5 million people watch Oprah and she has a well-documented sway over their psyches and their pocketbooks. Marketing CEO Mary Lou Quinlan says Oprah is pure political gold.

Mary Lou Quinlan: People love Oprah. They don’t just like her, they don’t just follow her, they love her. And they believe she wouldn’t lie to them. And, if you can put truth into politics, well that’s one heck of a branding job.

A branding job that will be enormously helpful, says Columbia University political historian Evan Cornog. He says politics is all about honing a good image.

Evan Cornog: Issues, after all, are incredibly complicated. What you try to do if you’re a candidate is simplify them — come up with a nice story that sums up who you are, come up with a set of stories that express what the issues are.

And Oprah’s story is all about integrity and compassion says marketing CEO Quinlan. She says those qualities will be a lot more effective at winning over voters than things like tax policy and health-care reform. She says that’s because most of us pick politicians the same way we pick any other product.

Quinlan says Obama will become part of Oprah’s inspirational, self-improvement message and people do seem to be inspired. A CBS poll found nearly a third of people said they would be more likely to vote for Obama because Oprah endorsed him.