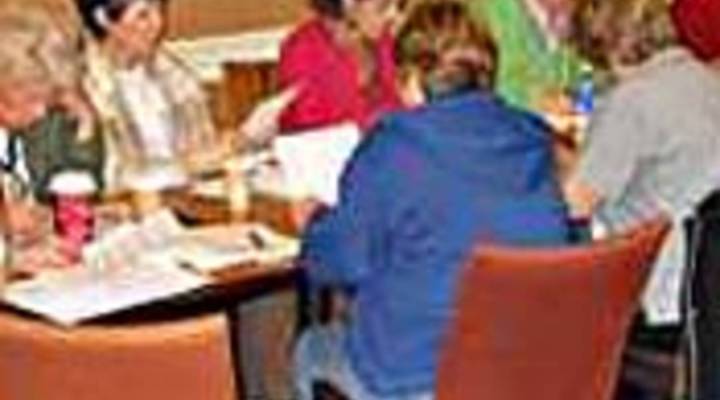 Tess Vigeland: Back now to our investment club series. We’re following three clubs — one in Seattle, another in San Jose and a third in Fairfax, Virginia — as they figure out what stocks to buy, sell and hold throughout the year.

We’re back with Formerly Baroque, 12 Virginia women who gather once a month on Saturday mornings to talk stocks, bonds, limit orders and grandkids.

In fact at the meeting in November, club member Pat Meadows passed around photos of her newest grandchild…

Club Member: Oh, look at this.

Club Member: Look at that face.

Jonelle Usselman: We certainly have a quorum. Tess, welcome, we’re glad to have you back.

These ladies have had quite a year on the stock market — had I known back in January, I’d have invested right along with them!

They started the year with almost $89,000 in the club account. At the end of October…

They did take their lumps at certain points in the year, but then rebounded.

Maureen Andersen reviewed the club’s performance since the last time I met with them in July. That was just as the credit crunch was hitting the headlines.

November’s market gyrations knocked them down a bit again, but the club will most certainly end 2007 with an overall gain of more than 10 percent on its investments.

You may remember in previous episodes we’ve followed their shares in Crocs, those madly-popular-but-ugly plastic shoes.

The club bought into the stock at about $24 a share in January. They sold it a couple of months ago using a stop-loss order. I asked Fran Betzner if that turned out to be a good move.

Vigeland: So, had you not sold it, you’d be taking a real hit?

They’ve also done well on recent investments in Apple and an exchange traded fund that gets them in on Brazil’s economy and then there’s the Turkish cell phone company, Turkcell.

Barbara Horn manages that stock holding for the club.

Barbara Horn: Well last month, I recommended we sell Turkcell. That was dumb. Fortunately, I watched it and we didn’t sell. Every day, it’s been inching up. At the last meeting, it was $21.07. Today, I have $27.50. We’re at 50 percent. So, we’re going to hold it and I think maybe we ought to consider buying a little more.

They only purchased ten shares at $649 a share, but since this club is all about learning the ways of the market, they wanted to see what it was like to own a Wall Street superstar.

Club Member: By the time it got to $741, Bobby and I are going “Yes! I wish we’d bought 100 shares or would have been able to” and then of course it came back down and we’re thinking “Glad we only bought 10.” We’re down 2 percent.

Vigeland: So, what prompted you to buy it — why now?

Vigeland: So next, will you be buying Berkshire Hathaway?

Club Member: If we could, we would.

If they do decide to invest in Berkshire Hathaway, they’ll need $148,000 for one share.

Meanwhile the group voted to get rid of some of their underperforming stocks and several members presented new stock recommendations that reflected their concerns about the economy.

They voted to buy shares of traditional stalwarts including McDonalds, Coca-Cola, and liquor giant Diageo.

That last purchase wasn’t without some reservation from several club members, including Maureen Andersen.

Andersen: Yeah, it sounds great but I just have a problem buying something that deals with liquor when I know so many families that have been ruined by liquor, including my own.

After lengthy discussion, the group took a vote.

Usselman: On the table right now is the proposal to buy 100 shares of Diageo at approximately $89.30. All those in favor? All those opposed? Passes.

Vigeland: Well, before you adjourn, I want to thank you all for letting me sit in this year. It’s been a pleasure. I think you’re all just a delightful bunch.

Next week, our final visit with the San Jose group.

We’re looking for new clubs to follow in 2008. If you’re willing to let us sit in on your meetings, go to marketplace.org and click on contact.