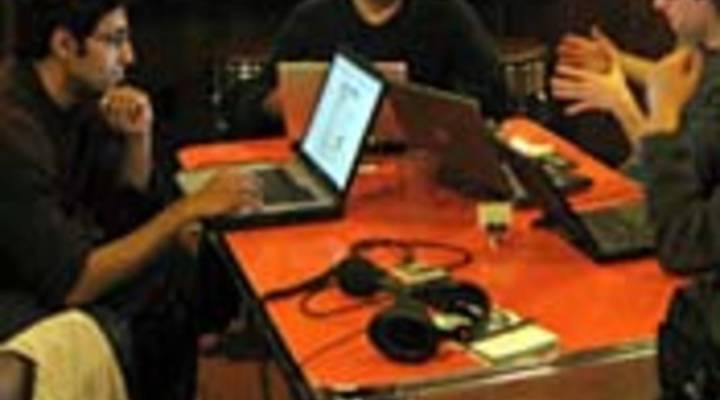 Tess Vigeland: It’s time for a final 2007 update in our investment club series. All year, we’ve been following three clubs, one in Seattle, another in San Jose and a third in Fairfax, Virginia, as they figure out which stocks to buy, sell and hold throughout the year.

Our last visit to Seattle was back at the end of July, just as the credit crunch and mortgage mess were taking a serious toll on Wall Street. This time around was no better as club members Nathan Buggia and Sandy Phadke digested the day’s rumors of potential bankruptcy at the online brokerage E*Trade.

Sandy Phadke: I remember three years ago when we looked at E*Trade it was getting most of its money from mortgages, not from brokerage income. It was really surprising. Now, I guess this is the other shoe dropping.

Nathan Buggia: The CEO said they can’t account for how much debt they have. They just … don’t know.

Also around the table, Mohit Srivastava, Sumit Lohia and Chen Lim. They’re all members of the Meridian Pacific investment club that meets once a week at the Vivace coffee house in Seattle.

The big assignment for this gathering was to review the pros and cons of a recently announced corporate breakup, Barry Diller’s IAC/InterActiveCorporation or IACI. It’s currently a mishmash of retailers, advertising and Internet companies. Chen Lim took charge of researching the split.

Chen Lim: Quick recap: so, IACI is spinning off into five component companies. So, what I did is I took a look at their past couple of years of 10ks, their annual reports, and I also took a look at the latest 10Q and I also listened in on the conference call where they announced the split to get any kind of tidbits of information. So here’s the output from what I’ve gathered from all that.

And with that, Lim started his computer presentation for the group, complete with charts and graphs of IACI’s performance and its component companies, including Ask.com, the Home Shopping Network and Ticketmaster, among others.

Buggia thought of all the properties, Ticketmaster might ultimately be a good stock to purchase after the split.

Buggia: I think that’s the company with the most opportunity for growth. They do one thing, they do it really well and I feel like they have other assets that they’re not selling. For example, information. They don’t syndicate their list of events anywhere, to any of the major search engines, for example.

Mohit Srivastava: I wonder how much disclosure they’ll give about the vision and the leadership of Ticketmaster before the split happens.

Lim: I assume they will. I don’t know what the next point is — well, they definitely need to announce what the split will actually be, so I assume they’ll have to provide financial statements for all five companies.

Vigeland: So this is something that essentially you’ll watch over the next few months, but it sounds like, if you were to invest in something, you’re kind of leaning towards Ticketmaster after the split?

Phadke: Probably Ticketmaster, based on the valuation, if you take a look.

Srivastava: Ticketmaster, I think, also because it’s easy to understand.

But none of that happens until next year. So for this year, I wanted to know how they’d done on their investments. Remember this club is a little different from the ones in San Jose and Virginia: they don’t invest as a group.

Buggia: I’ve had probably about an 8 percent return. It’s been a very boom and bust kind of year. We made a couple good investments that netted quick big money — that was Google and Microsoft — but aside from those, it’s just been sitting, waiting for opportunities and not really investing much at all.

Vigeland: How about you Sandy?

Phadke: I’d say my 401(k) is about 12 percent. My brokerage account is doing a little bit better because I’m disproportionately exposed to Microsoft, which just happened to have a pretty good quarter. So, because of that I’m up 17 percent.

Srivastava: Yeah, I’ve been up as high as 20 percent and I’ve lost like 8 percent in the last two weeks. My strategy for the past year has pretty much been to bet against the dollar.

Sumit Lohia: Some of the amount is sitting in money markets just because it’s just parked there waiting to see how this all turns out. In a different light, I’m at a time where I want to start looking at actually buying real estate in Seattle. The market’s is really good, so it makes for a good investment opportunity sometime, any time over the next three or four months for sure.

Vigeland: And Chen? I actually haven’t seen you since January, so how have your investments done over the year?

Lim: So, looking back over the last year, I think what I did personally was I was spooked earlier in the year, so I had taken most of my money out into cash. And what I was doing was sitting on the sidelines, waiting for the crash, which didn’t really happen early this year and of course, there was this mid-year rally in tech particularly. I actually caught some of that. I think I cherry-picked a couple of stocks. I remember I got into Google and I rode it from 520 up to 600.

As they wrap up the year, these guys, like many investors, are aware of the potential for recession. I asked Nate what his reaction is when he hears the “R” word.

Buggia: I curl up and I cry. So, I mean, there’s the standard stuff that you’re supposed to do like utilities and commodities and I’ve done a little bit of that and not a whole lot more.

Srivastava: There is opportunity to make money outside the U.S. even if the U.S. economy is in recession, more so than there was in the past.

Vigeland: I want to thank all you guys for letting me sit in over the past year and good luck next year.

Buggia: All I want to hear is in your last report, all the clubs did well, but the Seattle club beat all of them.

Tune in next week to find out how the women of Formerly Baroque in Virginia have done this year.

By the way, these were our final meetings with these clubs. We’re looking for new ones to follow in 2008.

If you’re willing to let us sit in on your meetings every so often, send us a note about your own investment club.

Go to marketplace.org and click on contact. You can also find the entire year-long series on our Web site.