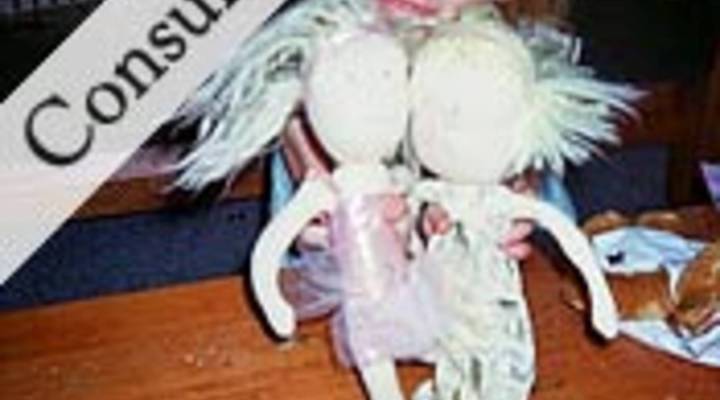 Why buy new when used will do?

COPY
Five-year-old Daphne Mullen with a couple of the homemade dolls she's giving out as gifts to her friends. Terry Mullen
Consumed: Part One

Why buy new when used will do?

Five-year-old Daphne Mullen with a couple of the homemade dolls she's giving out as gifts to her friends. Terry Mullen
Listen Now

Tess Vigeland: Steve’s story makes it abundantly and depressingly clear how tough it is to get yourself off the marketing grid. The consumer culture is a powerful force.

Sometimes, like the freegans, you have to get super-radical to challenge that force. Meet the Mullens.

They’re a typical, middle-class family of four living in the bedroom community of Daly City, California. Stay-at-home mom Angelique is 36. Her husband Terry is 38 and works as a stagehand. Their daughter Daphne turned five this year. And their son Henry turned one year old.

The Mullens are members of something called The Compact. A group of people who vow not to buy anything new for an entire year, except basic necessities like food and toothpaste.

We decided to follow them through the year to see what it was like. Here’s what Angelique told us back on January 3.

Angelique Mullen: I feel really good about it. I feel excited about it. It’s a challenge and I think that’s one of the things that appeals to me about it.

We next spoke in March, and the Mullens were staying strong.

Mullen: It’s going very well. We haven’t had any problems so far. Not too many challenges either. We’ve been OK. I might be having a little bit of withdrawal starting now but, I find sometimes I think “what can we do? Maybe we’ll go shopping. Oh wait, we can’t do that! We can’t go shopping.” So then I remember. And I don’t even know what I would want to buy, so it’s not like there’s anything urgent that we need or want.

Mullen: We’re still doing it, but I’m really feeling like I’m ready for the year to end. I’m ready to stop.

Vigeland: What’s been the hardest part?

Mullen: The thing is, it’s not even like I have anything that I specifically want to buy. It’s just the fact that I can’t. Or I said I wouldn’t.

And still five months to go.

The Mullens decided this would be their year off the hamster wheel of consumerism after trying it out a month at a time last year. But it was the holidays that finally kicked things off.

Mullen: I was ready. I mean partly because the consumption that happens around Christmas is so overwhelming — you always feel like you need to like a purge. And so that’s why I thought it would be so easy. And then of course the regular year starts and birthdays happen…

For Angie’s husband, Terry, the motivation came from a slightly different source.

Terry Mullen: I just get disgusted looking at catalogs where there’s so much frivolous stuff. Your grandparents used like a marshmallow on a stick, it wasn’t like this fancy self-rotating s’mores machine.

Angie says the family has broken the compact a couple of times. They bought a new coloring book for the kids to take on a camping trip, and Terry bought some new camping equipment and they bought a new heater for their house.

But Angie got to the point where she felt guilty about those small purchases. And about halfway through the year she started to feel deprived.

Angelique Mullen: But I know it’s absurd because I know we are not deprived when you look at world standards of income and I have to remember that. But, you know, I mean, we need little things like a handle for the door in the back yard.

Vigeland: It seems like a handle for a door would be a necessity. How have you gone about making that determination?

Mullen: There’ve been times when my husband and I have disagreed about that. He thought the handle was a necessity and I didn’t think it was. OK, here’s another one. We got a sandbox, a used sandbox from a friend, so we needed to get some sand for it. And I ended up just going to Home Depot. I knew when I was doing it that I was being bad. But I just, I could go to the beach, but that’s not really fair, I can’t steal sand from the beach.

And Terry agreed that the experiment hasn’t been easy. It’s delayed gratification, he says. It slows you down; you’re not fixing things as fast as you could if you had the latest new tools.

Terry Mullen: But I think you get more enjoyment out of the process because you really feel like you’re crafty, you’re doing it the old way. That’s the question you always come back to: well, what did my grandparents do before they had the gadget that they could just buy off the shelf that could do this fancy thing.

The lack of shopping as an entertainment option has had some definite upsides, too. It’s meant more trips to the beach just a few blocks away. And more family hikes and a lot of time in the backyard.

Another benefit of not setting foot in a Target all year? The Mullens have noticed the experiment is helping pad their bottom line.

Angelique Mullen: ‘Cause you know what? I know when I go there I’m going to spend money that I don’t need to spend.

And when’s the last time you escaped a big box store for less than 50 or a hundred bucks?

Bills are paid sooner than they used to be and credit cards are in hibernation.

And to critics who harp that if everybody did this, the consumer economy would tank?

Angelique Mullen: The truth is our money is still in the economy. We’re still buying things; we’re just not buying them new. But I do think that it’s important for people to think about the level of consumption they’re part of and to try to curb some of that. I think it’s just out of control.

The Mullens say they’ll try to keep the experiment going through the end of the year. So far, so good.

Ask yourself… could you do it?