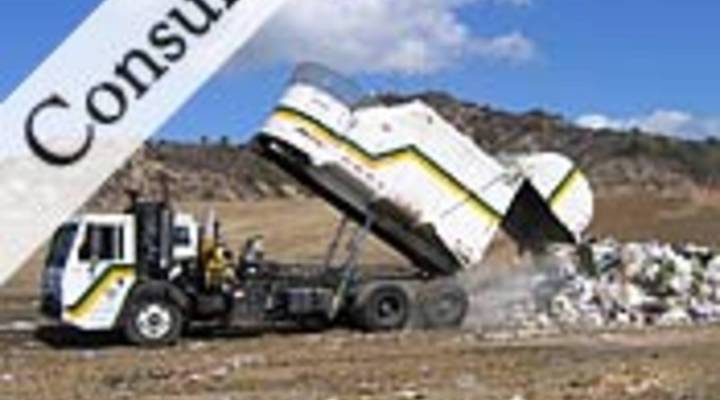 What hungry consumerism leaves behind

What hungry consumerism leaves behind

KAI RYSSDAL: We said up at the top of the program we were at the “mouth” of the consumer economy — the Port of Long Beach? Well, welcome to the other end. Puente Hills is the biggest landfill in America, a 1,300-acre mountain of trash not far from the port.

You might be thinking: “Yuck — a dump,” right. But that would change if you could actually see this place. Puente Hills is state-of-the-art. From across the street you can’t even tell what it is. All you can see is neatly terraced landscape. You can’t smell it until you’re standing on top of it.

Not every landfill is built like this. But, what’s the matter with garbage, anyway? Marketplace’s Tess Vigeland was wrestling with that same question, so she went out to ask some people who’d know.

Tess Vigeland: I figured if anyone could give me insight into trash, it’s the garbage man — so I hitched a ride with mine.

John Wilucz: John. You want to know my last name, too?

It’s Wilucz. John Wilucz has a front-row seat to the fact that we Americans, on average, throw away four-and-a-half pounds of garbage every day. That’s a heavy load. But John waxes philosophic about it:

Wilucz: In the beginning, we just had the trash…

He can also wax Biblical:

And no problem waxing homespun:

John’s wife used to send him out with a shopping list. He says he could find anything the family wanted — boom boxes, barbecues… But these days, trash collection is a clean, automated process. A hydraulic arm on his truck does all the hard work. He rarely gets out of the front seat. One truck can collect 10 tons in two hours. And when that’s done, it’s time to head for the landfill.

Not really. But the site overlooks downtown Los Angeles with nary a rat in sight. So I popped our question:

Wilucz: Well, there’s nothing right or wrong. It’s just a fact of life.

It’s also a fact of life that some folks — most, actually — don’t want landfills in their backyards.

Wilucz: So, we will run out of space and we’re just gonna have a harder time finding other space. It’s just gonna be more expensive to take care of the problem.

So money’s an issue. But there are other problems not apparent to the naked eye.

Elizabeth Royte: When we bury these resources in the ground, we’re generating greenhouse gases.

Elizabeth Royte is the author of Garbage Land: On the Secret Trail of Trash. The gas she’s most concerned about is methane.

Royte: Methane is a greenhouse gas. It’s 19 times more potent than CO2 in trapping heat around the Earth. So it’s important to keep methane out of the air — and landfills are the number-one source of anthropogenic, or man-made, source of methane in this country.

So maybe methane is the smoking gun. But it is the only one? Not from the standpoint of the most unusual trash experts I consulted — a group in New York City calling themselves “freegans.” They try to live without spending money, and invited me to Manhattan to see things their way. Late one night in June, I did.

Janet Kalish: Hello everybody… Welcome to our trash tour.

Organizer Janet Kalish leads New Yorkers around the city’s dumpsters. She wants them to appreciate the volume of waste that’s inside. More to the point, she wants them to eat it.

Kalish: There it is — the garlic, the onion, the sesame, the poppy…

Janet’s colleague, Adam Weissman, says that so much perfectly good food is thrown out every single day that he hasn’t bought any from a grocery store in 12 years. And this day seemed to prove his point:

Weissman: This is the dairy case right here — couple dozen butters, and about a dozen packages of a dozen eggs.

We found fresh broccoli, fresh bread and packaged carrots — all-in-all, enough food for a banquet, let alone a healthy diet. I asked Kalish why this happens.

Kalish: It’s just a fact that the supermarkets are throwing away vast quantities because they’re ordering too much. They’re producing too much. And they want to have this vision of abundance that we’re used to in this country.

That need for abundance, the freegans point out, doesn’t stop at food. Literally tons of useable products end up curbside — clothing, furniture, packaging… And it doesn’t stop there:

Vigeland: What are you carrying?

My garbage man was right: There’s nothing made by man that hasn’t been chucked. And that, says freegan Adam Weissman, is the ultimate trouble with trash.

Weissman: Consumers have been impelled to think that waste should be our way of life, that convenience means throwaway products. And as a result, we spend more than we need — and ultimately, consume our planet’s resources.

Problem? Or not? In Manhattan, I’m Tess Vigeland for Marketplace.