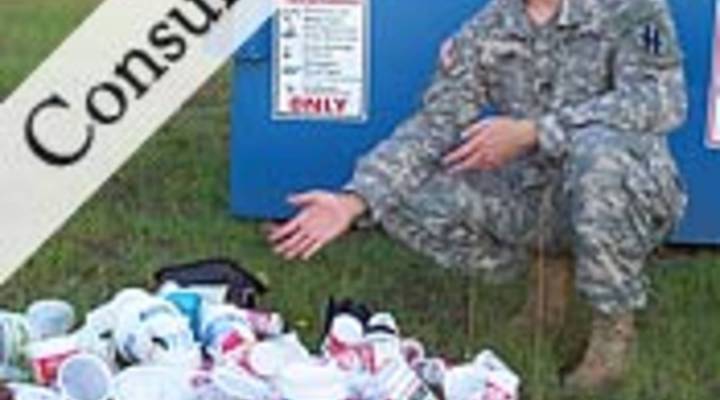 More tales from the trash challenge

COPY
Capt. Andrew Lane of the Army National Guard -- aka "Captain Planet" -- with just some of the recyclables he's saved from the dump at Fort Stewart in Georgia. Capt. Andrew Lane
Consumed: Part One

More tales from the trash challenge

Capt. Andrew Lane of the Army National Guard -- aka "Captain Planet" -- with just some of the recyclables he's saved from the dump at Fort Stewart in Georgia. Capt. Andrew Lane
Listen Now

Many of you know I got a very personal answer to that question a few weeks ago. As part of this series, I carried my trash around with me, everywhere I went, for two weeks.

I challenged you, dear listener, to join me and many of you did.

Sueann Ramella is a public radio host in Pullman, Washington. She took the challenge for one week back in September.

Sueann Ramella: I’ve been hanging out with a lot of hippie friends lately, so I thought this would be a great way to see what the life is like through their eyes.

For her the biggest challenge of the challenge was having to think about what she was throwing away 24-7.

Ramella: When you’re at the grocery store, all of a sudden you’re faced with “should I buy this tuna cause it’s in the nice little aluminum packaging or should I buy it in the can?” Sometimes you’re just lazy and it’s like a luxury just to not even think about it and throw something in the garbage can just to get rid of it.

But the challenge did do its job, forcing Sueann to change some habits.

Ramella: I use, personally, a lot of paper products, like tissues and paper towels. So much so that I decided to switch to cloth napkins. And now I use a hanky. In a weird way, you know, doing this trash challenge has just shown me how much I buy and how much of that isn’t necessary.

Another challenge participant, Andrew Lane of Athens, Georgia, prides himself on already being a model citizen when it comes to trash.

Captain Planet is also a captain in the Army National Guard and Andrew Lane said he’s been a dedicated recycler for years.

Lane: Whenever we would go on runs at Fort Stewart, Georgia, I would always carry a grocery bag with me and pick up a few cans and bottles along the way.

But fellow soldiers made sure that didn’t happen while he was stationed in Iraq.

Lane: They said now we’ve got to get you out of this habit because of the IEDs and the threats over there. They like to camoflage bombs in trash.

And so back stateside without those kinds of … restrictions, Lane had plenty of confidence that he’d have no trouble with the challenge.

Lane: I can easily put my two weeks worth of trash in a Wal-Mart-size normal shopping bag.

Vigeland: How do you do that? Because not everything is recyclable.

Lane: It’s not and that’s actually what I have in my bag which is over there attached to my backpack. I opened a mouthwash today for my son and of course, that little safety seal wrapper I don’t know quite what to do with.

We spoke when he was on day ten of his challenge and Lane said even with all his recycling experience, it was eye-opening to haul around his garbage instead of tossing it out.

Lane: You just put it in a little bag on the curb and the garbage truck comes and you never have to think about it again. But it is staggering how much we throw away — everything is disposable.

Kelsey McDonald is another challenge participant. We checked in with the Claremont College student just as she ended one week of carrying her trash around the Southern California school. I asked her to list what was in her bag.

Kelsey McDonald: Um, I have a lot of coffe cups, paper coffee cups, and, um, some rotting apples and celery, tissues, mostly the fruit is starting to smell a little rank and the whole thing’s moist and yucky.

Yes, there are compost bins on the far ends of campus, but sometimes she just didn’t make it there.

Her lessons echo those of Sueann and Andrew.

Good luck to the roommate.

But there McDonald does hit on one big key to reducing our waste stream: make it at least, or even more, convenient to recycle something than to throw it away.