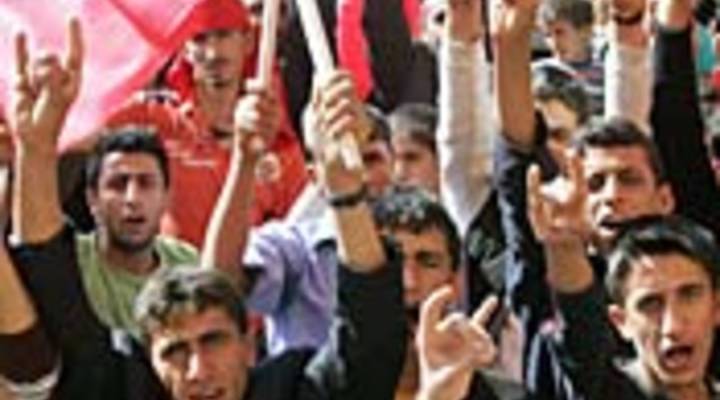 KAI RYSSDAL: Today the United States promised Turkey that it would help stop Kurdish PKK guerrillas from operating in northern Iraq. Dozens of Turkish military have died in recent PKK attacks. Turkey has 10,000 soldiers on its border with Iraq, backed by tanks and aircraft.

Talks will continue this weekend in an effort to defuse the situation. Los Angeles Times reporter Borzou Daragahi is on the line with us from Kirkuk. Good to talk to you again, Borzou.

RYSSDAL: Should we be worried, at this point, about the one relatively stable oil-producing region in Iraq coming under some question?

Daragahi: There’s been a constant low-level counterinsurgency operation on the part of Turkey and Iran, targeting the mountains where the Kurdish rebels are hiding out. Unfortunately for some of the farmers here, the bombing campaign came right during the harvest and disrupted it, costing a lot of people money. And also, there’s just this increased perception that Iraq… is a really unsafe place. You know, forget Sunni-Shia or Arab-Kurd, what’s this new dimension of chaos and violence here? The Turkish-Kurdish question raising its ugly head.

RYSSDAL: So, what do you think that does to the climate of business investment there in northern Iraq?

Daragahi: Well, I think in Iraq in general, and definitely even moreso in northern Iraq, because of its history, there has long been this business culture that’s really against investing — really prone to mercantile cash-and-carry ventures, you know, so that a guy who has a lot of money, he’s much more inclined to buy a bunch of TV sets, sell them real quick and then take his cash out of the country than to actually build a factory that produces shoes or some kind of widget that creates jobs. And this reinforces that — this reinforces the idea, especially among wealthy Kurds and wealthy Iraqis — that Iraq is not a place to sink your money, it’s a place to quickly make some cash and get the heck out.

RYSSDAL: Certainly, this is not the first time that Iraqi Kurdistan has faced uncertainty. How have they dealt with it historically?

Daragahi: You know, there’s this saying that the Kurds have no friends but the mountains. And historically, they’ve emptied out their safes, emptied out their inventories, got it into their cars or trucks or on horses and headed into the mountains and hidden, and waited for the situation to calm down — then came back and opened up their shops again, slowly. And you know, unfortunately for Iraqi Kurdistan, this has been a really great period of growth over the last five years, a rare period of stability. It’s extraordinary what has happened to the “Kurdish Tiger” in terms of the economy here.

RYSSDAL: Are you seeing signs already of that kind of flight?

Daragahi: Oh, definitely — I think that there’s a real… For example, on the streets of Erbil today and yesterday, there’s quite a bit less traffic than there usually is. There’s less construction work, there’s been a little bit of a halt to the massive construction projects that were going on as investors wait and see, wait what’s going to happen here. Is it going to actually — are the Turks actually going to invade or not? And so it’s palpable, with some stores hurrying to empty out their inventories for fear of a war.

RYSSDAL: So then, who is propping up the economy there, on even a semi-permanent basis?

Daragahi: Well, I think one of the ironic parts of this is Iraqi Kurdistan has become one of the most friendly investment environments for international investors in the region, because of that issue we were talking about — this fear of the Iraqi Kurds plunking their own money down on this place. You have a lot of foreign investors, especially in the Arab world and from other parts of the world very eagerly buying chunks of the place… It’s really pretty easy to buy property in Iraqi Kurdistan, really easy to repatriate funds and profits from investments. And it’s visible on the streets, what’s happened here. And this is definitely going to slow that down, definitely going to make future investors think twice about coming here.

RYSSDAL: Borzou Daragahi is a Middle East correspondent for The Los Angeles Times — thanks so much for your time today.

Daragahi: It’s been my pleasure, Tess.