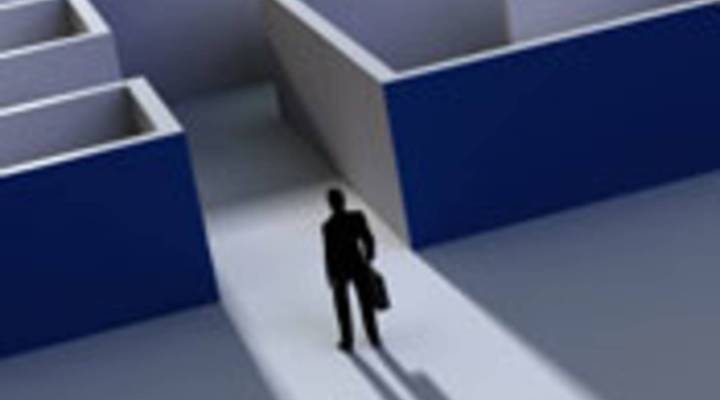 The battle to decrypt "legalese"

The battle to decrypt "legalese"

Tess Vigeland: So Janet just told us about the confusion lots of folks feel when they’re called upon to voice their opinion as investors. A big part of that confusion? All that gobbledygook they write in those proxy statements. And it’s just some of the legalese that fills all kinds of government and business documents.

Here’s one example from the General Services Administration:

When a person, for his or her own convenience, travels by an indirect route or interrupts travel by a direct route, the extra expenses shall be bourne by him or her…

Enough already! Well, this week a bill was introduced in Congress aimed at translating language like that into plain language.

And we’ve brought in an expert to translate.

Vigeland: Annetta Cheek, what does all that mean?

Vigeland: Alright, well that’s exactly the kind of language I would expect from the co-chair of the Center for Plain Language and thanks for coming in.

Vigeland: So what exactly does this new legislation hope to accomplish?

Cheek: The legislation itself targets documents that go directly to the public that the public needs to deal with to get a service or benefit from the government and that’s a pretty broad set of documents.

Vigeland: So, perhaps this would actually allow us to read through the IRS code and understand what we’re supposed to pay?

Cheek: Well, the forms anyway. This bill affects the executive branch — of course, Congress never passes a law that affects what it does. That’s for my next lifetime, is trying to get Congress to write clearly.

Vigeland: I’ve got to tell you, financial documents are almost worse. How did they get so arcane and wordy?

Cheek: Well, I’m afraid it was mostly the lawyers.

Cheek: Shocked and surprised, right? We do have a lot of lawyers who are strong advocates for plain language, but when a lawyer is working on a government document or a financial document, they want to be super super sure that they’ve covered all of their bases. They’re going to write these really long sentences just to make sure they cover everything and what you end up with is something that nobody can understand.

Vigeland: Well, I guess my biggest problem with this is that, as you said, it really only affects the executive branch, not even all of government and, I’ve got to tell you, I wish that this would happen in the private sector because trying to read annual reports and anything that comes out of Wall Street is practically impossible.

Cheek: Yes, and I know that the Securities and Exchange Commission is very dedicated to trying to clear that up, but, you know, it’s a very entrenched culture. It’s really part of the culture, the way we communicate. And another problem is it’s not easy to write clearly. First off, you have to think clearly — often a problem — and you see this finished product that looks so simple, but getting there is actually quite difficult and when you’ve been in a bureaucratic system for so long, it’s really difficult to step back and say “Well, now, how can I say that more simply?” It causes a lot of people pain when you want them to take out their passive verbs, take out what we call “noun sandwiches.” It’s just foreign to them because they’ve been writing in the bureaucracy so long.

Vigeland: Well, obviosuly, being able to understand a document is kind of its own reward, but what else will consumers gain if more government agencies just decide they’re going to use regular ol’ Joe” language?

Vigeland: Well, Annetta Cheek, thanks for keeping things plain and simple for us.

Vigeland: Annetta Cheek is the co-chair of the Center for Plain Language.