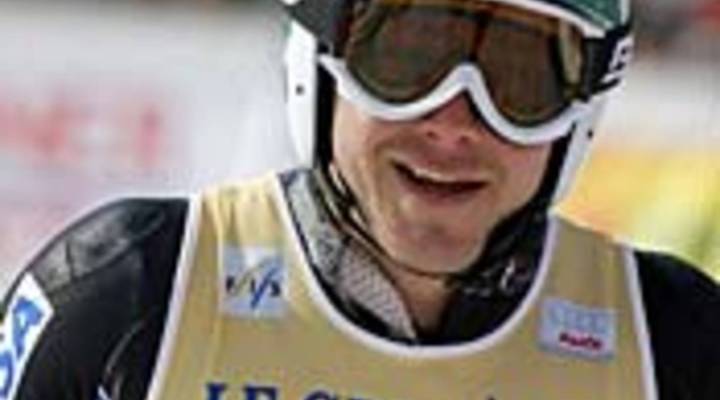 The business of being Bode Miller

The business of being Bode Miller

TESS VIGELAND: Well, I was kind of hoping we could keep talking about the World Champion Boston Red Sox, but I guess we’re gonna talk about skiing instead.

NYAD: You know you are so warped in that particular area. Congratulations by the way.

VIGELAND: Thank you very much, on behalf of the team. But let’s go ahead and talk about Bodie Miller. The guy’s arguably the biggest personality in skiing, and part of that personality is the whole “Hey, I’m an independent dude” thing.

NYAD: Is he ever.

VIGELAND: In fact, he has gone completely independent from the team.

NYAD: Yeah, he has dropped out of U.S. Skiing. Now, that doesn’t mean he can’t compete in any event he wants. Including the Olympic Games. You know, you would think you’ve got to be part of U.S. Skiing if you’re going to compete in the Olympic Games, but no. If he qualifies he’s an American. But, what does he really do then for U.S. Skiing who’s going out there trying to raise funds, to develop the program, to get younger kids to come through the program? You know what he’s doing? Absolutely nothing.

VIGELAND: Well, let me ask you. Why does he owe U.S. Skiing anything? I mean most of us don’t feel like we owe or should stay with the employers who helped launch our careers. We move on.

NYAD: Yeah, but you know, I think Michael Phelps, in swimming might be the perfect example here. I mean, Michael Phelps years ago was a kid growing up, and yeah, he had talent, but nobody knew, including him, that he was gonna be the best swimmer in the world, touted as better than Mark Spitz. So U.S. Swimming, as he was coming up through their developmental programs, sent Michael Phelps around the world with their training and traveling grants. Made sure that he had plenty of gear of what he needed so that he could train, and you know have the latest of technology. And now, Michael Phelps is up to a little over $30 million a year in all of his particular individual contracts. So he doesn’t, as Bodie Miller, he doesn’t need U.S. Swimming, as Bodie says he doesn’t need U.S. Skiing. He doesn’t need travel money, he doesn’t need coaching money. But, he is the first one that shows up at the sponsors’ tents at the Olympic Games, at the World Championships. Shakes everybody’s hands. Stands in the middle of the U.S. swimming team. Gets his picture taken like “I’m part of this team. I’m part of U.S. Swimming. U.S. Swimming made me so now I’m going to help them bring up the next generation.” Whereas Bodie Miller says “Who cares.” I’m just not going to show up, I’m not going to help them at all.

VIGELAND: I wonder if another example of this that just comes to my mind is golf. We’re seeing some of the top players, including Tiger Woods, back away from events like the FedEx Cup and tennis players routinely dropping out of big tournaments. But, isn’t that their prerogative? Is it their responsibility to prop up event sponsors and TV contracts?

NYAD: Well I think that on the one hand, yes. They are individuals. It is their prerogative. Do we admire them, you know, as much for not dropping out? And I think the greatest example is one you were bringing up, is the FedEx Cup. This was the inaugural year. They made it sort of the year-end, you know, sort of showcase event where they played four events one after the other in September. And, you know, the big winner, who of course was Tiger, takes home all the big cash. And, you know, it was ill-conceived and they’ll probably really look at doing it differently next year. Because if you had enough points, which Tiger did, to win without doing all four events, he had so many points that he could skip one.

VIGELAND: And take the money.

NYAD: And take the money. Now just as U.S. Skiing, I called the people from U.S. Skiing, and I said “You know come on doesn’t it hurt you that you can’t market U.S. Skiing with Bodie Miller and they said “Oh no, we’re doing just fine. We have all kinds of stars at skiing and we don’t need Bodie Miller.” And you know, just like in golf, if we could be a little fly on the wall. You know they come out to the press conferences and say “Well Tiger’s not here this week but that doesn’t bother us at all. We’ve got all kinds of great personalities in the game of golf. It’s gonna be a wonderful weekend, you know, Tiger or not.” Well, if we could be that little fly on the wall in their board meetings, they’d be going “Oh my God, what are we going to do?” Well, you know they pretty much feel the same about Bodie Miller, you know, wish they had him on the team.