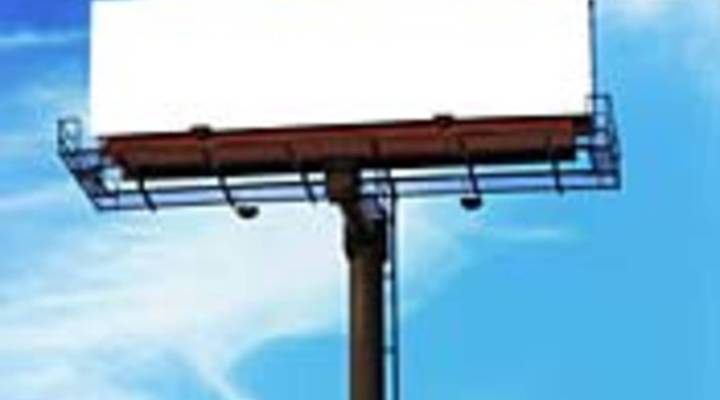 KAI RYSSDAL: Oregon voters go to the polls in a special election about week-and-a-half from now — and what they see on the way there might well have an impact on how they vote.

Technically, they’ll be deciding on a measure that will limit development. It’s a tit-for-tat response to a highly controversial pro-growth initiative that passed back in 2004. But the politics have cosmetic implications for the Beaver State’s well-traveled roads.

Ethan Lindsey: This year’s vote in Oregon is a continuation of a three-year-old debate. In 2004, Oregonians overwhelmingly voted to give property owners a lot more freedom to build. That law, known here simply as Measure 37, lets landowners ignore any new laws passed since they first bought their land.

The shabby Oregonians In Action office is in a Portland strip mall. The property-rights activists who work here are the masterminds behind the movement that turned Oregon upside down.

Ross Day is a lawyer with the group:

And he says many developers are now taking their newfound power to the streets. Oregonians have long been proud of their 8,000 miles of state highways. The pride many feel comes from the fact that the state has some of the least visually cluttered roads in the nation. That’s because Oregon has regulated the quantity and quality of billboards for more than 35 years.

Amy Joyce: Of those states that allow billboards at all, Oregon has had some of the tightest restrictions in the nation.

In the 1960s, Oregon embraced the ideas of Lady Byrd Johnson who wanted to keep highways clean. Oregon issued billboard permits on the basis of location and content, but capped that number at 2,500, and hasn’t increased it since 1971. The limited supply made the permits tradable and worth up to $100,000.

Joyce: I think the cap-and-replace system is unique to Oregon. It’s not a black market, it’s completely legal. They could obtain a permit and they are freely transferable on the open market.

And says Amy Joyce, that market worked — until Measure 37 passed, and a billboard company challenged the constitutionality of the permit system. The State Supreme Court struck down the system, and said anyone could put up any billboard. Ross Day says the state had no right to pick one sign’s content over another’s. He remembers one client:

Day: Tater Patch Quilts, rght on the California-Oregon border. They had a giant sign, if you are facing it on the right. On the left was the “Welcome to Oregon sign.” Their sign was okay, our sign wasn’t.

Joyce: I wouldn’t call it an explosion, but there have certainly been a number of new signs that have gone up.

…about 100 new billboards so far. But time’s, they are a’changin’ — opinion polls show voters may just re-ban un-permitted billboards. And if the measure passes, developers who bought land decades ago won’t be able to do whatever they want with it. This summer, the state legislature reinstated the permit system, but said they will avoid judging content in awarding permits. Amy Joyce:

Joyce: And then I expect a lot of litigation over what the new law means, what the old law meant.

Joyce says she expects that litigation to go on for years.