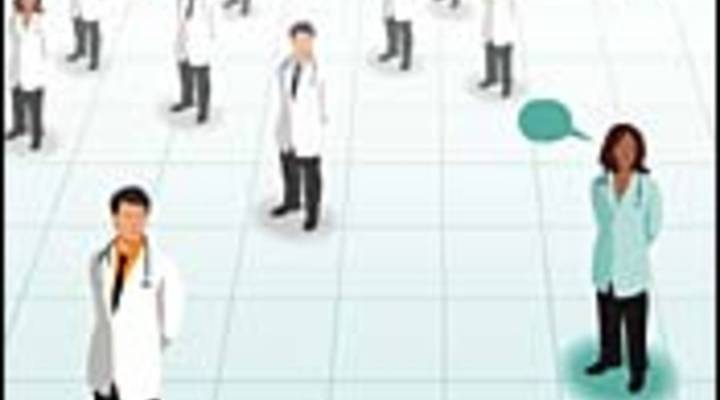 Doctors let drug maker in on their talks

Doctors let drug maker in on their talks

KAI RYSSDAL: You’ve all heard of social networking, right? Sites like MySpace and Facebook… Various groups have created their own special places online.

Physicians call theirs Sermo. Thousands of doctors have registered as members — they discuss cases with each other, ask questions, trade diagnoses and blog about different medicines and techniques.

Today, they decided to let the drug-maker Pfizer in on the conversation, which is causing a little bit of indigestion. Stacey Vanek Smith reports.

Stacey Vanek Smith: Sermo was launched about a year ago, and now has more than 30,000 members. Doctors join for free. Sermo makes its money by letting hedge funds, government agencies and drug companies pay to peek at what all those doctors are talking about.

Founder Daniel Palestrant says he was wary about corporate partnerships, until members started asking for it.

Daniel Palestrant: What the doctors were saying is that Sermo has quickly become a voice among physicians — and that industry needs to participate, and needs to hear that voice.

Today, Sermo announced that it will partner up with Pfzier. In exchange for an undisclosed chunk of change, Pfizer will be allowed to have company-affiliated doctors contribute to Sermo blogs, weigh in on discussions and offer information about Pfizer products. Merrill Goozner is with the Center for Science in the Public Interest.

Merrill Goozner: You might call it a coup for Pfzier, to break open this brand-new way of marketing to physicians.

Goozner says drug companies are facing an uncertain future. Many best-selling drugs, like Lipitor, are rolling off patent — not to mention states are cracking down on drug companies’ gifts and freebies for doctors. Still, Goozner says, letting big drug companies infiltrate Sermo could be bad for patients.

Goozner: We need, as patients and consumers, to see physicians talking among themselves about what’s best for patients — not having another space where every time they turn around, it’s the equivalent of a drug rep with a pizza showing up to tell them “Hey, here’s the possible solution.”

But there could be real advantages to Pfizer’s presence on Sermo, says James Unland, president of Health Capital Group consulting firm.

James Unland: Drug companies can put audio and video interviews with experts and particular drugs. There is a way to do this creatively, and actually inform the doctors in greater depth than they could in a magazine or on television.

And Pfzier’s not the only one — Unland says with revenues shrinking and growing regulations over how they can market to doctors, drug companies will have to start getting creative.