KAI RYSSDAL: Canada’s currency, the loonie, is virtually within a penny of parity with the U.S. dollar. It hit a 30-year high yesterday against the greenback. After the Fed’s rate cut, the loonie followed the rally on Wall Street.

The impact is most immediate and tangible in cities along the border. When the dollar was strong, shoppers from Detroit and Buffalo used to head north to stock up. But soon, as Alison Myers reports from Calgary, the currency price could be right for Canadians to come on down.

Alison Myers: As the weather in many parts of Canada starts to cool, the natural instinct to seek warmth kicks in… Where better to find that than in the hallowed halls of the shopping mall?

As the Canadian dollar dabbles with U.S. parity, American retailers are hoping Canadians, like their geese, will head south for their retail therapy.

Already, Canadians are shopping online for products which they know come cheaper in the U.S. — books in particular. On the shelves of McNally Robinson in downtown Calgary, manager Brendan Hunter says the price discrepancies are painfully clear.

Brendan Hunter: I’ve got one here in front of me: Michael Connelly’s latest book, The Overlook, and there’s a substantial price difference there — $21 U.S. and $27.50 Canadian.

Canadians have been increasingly tempted to head south as the loonie and the greenback dance their parity polka. Now American retailers are hopeful it’s their turn to benefit from potential currency flip. 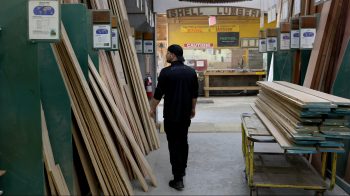