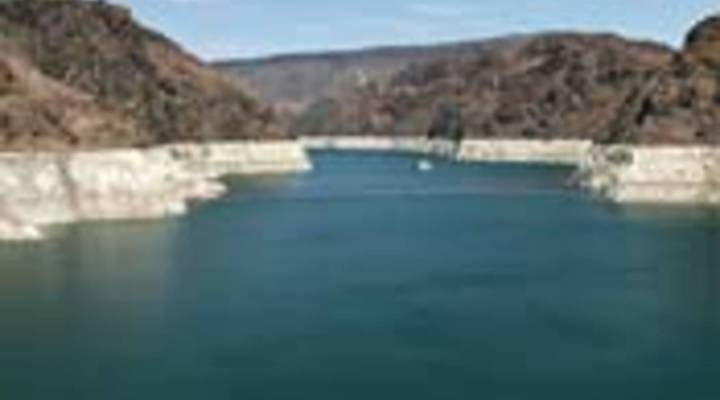 Doug Krizner: In Las Vegas, gambling is a way of life. Except when it comes to water.

Nevada is last in the nation when it comes to rainfall. Add rising temperatures and falling Rocky Mountain snowpacks, and Vegas has been in a decade-long drought.

Now, Sin City is trying to get residents to use less water. And not surprisingly, one initiative offers payouts to those who conserve. Stacey Vanek-Smith takes a look.

Stacey Vanek-Smith: Las Vegas gets its water from the Colorado River. So do seven states, and Mexico. The city’s share is falling because the Colorado has dropped 20 percent since last year.

Las Vegas diverts its dwindling share of the Colorado to nearby Lake Mead. The lake is now less than half full.

Nicole Lise: You can actually see a white bathtub ring around the lake, which demarks where the water once was.

Lise: We actually receive 90 percent of our water from Lake Mead. So this really is our life blood.

The booming city needs more water than ever. More than 200 people move to Las Vegas every day. Currently, about 60 percent of the city’s water is used to soak lawns.

So Las Vegas started its so-called “cash for grass” program. It pays people up to $2 per square foot to rip out water-sucking sod and replace it with things like cactus plants and bushes that don’t need much water.

Getting rid of all that green has cost the city well over $100 million — but it’s been a great investment, says Doug Bennett, conservation manager for the Water Authority.

Doug Bennett: We find that this is very cost-effective, even paying people as much as $2 per square foot.

Savings of 5 billion gallons of water a year. Bennett says that’s because conservation is cheaper than finding new sources of water.

Course superintendent Bill Rohret says they couldn’t have done it without the cash for grass program.

Bill Rohret: To take out 70 acres of turf was more than we could financially handle.

Rohret expects the new landscaping will cut water use by 20 percent. And, he says, golfers actually like it.

Rohret: We’re in the desert, it looks like we’re playing on a desert golf course.

Drought-stricken areas from San Diego to Australia have come to check out the cash for grass program. Last month, Mesa, Ariz. kicked off it’s own version of the plan.