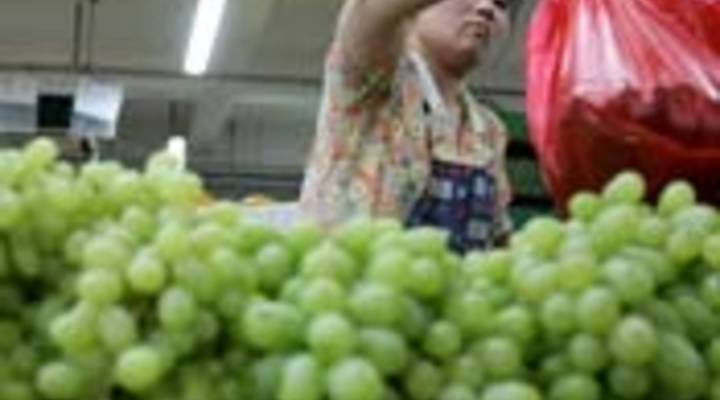 China has taste for California

COPY
A woman buys grapes at a market in Beijing. Getty Images

China has taste for California

A woman buys grapes at a market in Beijing. Getty Images
Listen Now

Doug Krizner: Consumer safety talks begin today between the U.S. and China, on things from toys to food. The U.S. bought nearly $290 million worth of Chinese exports last year.

But this isn’t a one-way street. China has developed quite an appetite for some unexpected U.S. specialties. Stacey Vanek-Smith reports.

Golden State goods are luxury products in China. They cost about twice as much as China-grown versions.

Kathleen Nave is president of the California Table Grape Commission. She was there when the first shipment of California grapes arrived in China 10 years ago. She says it was big deal, complete with reporters and state officials.

Kathleen Nave: When the lids were lifted off the boxes, there was just so much excitement about the beauty of the product, and the size and the color, and the fact that they were from California.

That novelty hasn’t worn off. China imported 28,000 tons of grapes last year. That’s about a fifth of the grapes California exported. Nave credits part of that growth to California’s cache.

Nave: There’s something of a brand identity. You know, the sense of sunshine and beaches. And that plays well in many markets around the world.

But it’s not just the chic factor. Like their U.S. counterparts, Chinese consumers are worried about food safety. And California’s strict regulations give the produce a reputation for quality among Chinese consumers.

In an upscale Shanghai supermarket, expectant mother JoJo is browsing California-grown nuts. She says she doesn’t mind the high price. She says she’s pregnant and it’s important to give her baby good food.

Trade expert Ed Gresser is with the Progressive Policy Institute. He says concerns about food safety will only mean more demand for California produce in China.

Ed Gresser: Give it five more years. If things keep on the way they do, then you’ll really see China as a agriculture market equal to Europe and equal to Japan for the U.S.