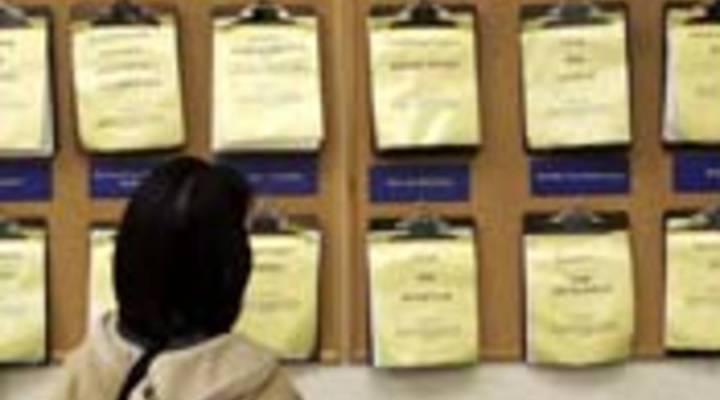 KAI RYSSDAL: In the grand scheme of things, 4,000 jobs aren’t really that many. But when the Labor Department reported this morning that for the first time in four years the employment market lost ground, well, you’d have thought the apocalypse was upon us. Wall Street threw in the towel. Congress got itself involved. And the people who’re supposed to know these sorts of things had been expecting a gain of more than 100,000 jobs. Our senior business correspondent Bob Moon has more.

BOB MOON: Many of those shocked analysts were saying today that about the only thing that would shock them more than today’s numbers is if this report doesn’t finally wipe the poker faces off of the nation’s central bankers.

It’s not so much that it forces their hand. At Mission Residential Research, Richard Moody says it actually gives Fed Chairman Bernanke some cover to cut interest rates, without it appearing that he’s just bailing out Wall Street.

RICHARD MOODY: With this employment report, and also with the downward revisions to the June and July reports, I think the economic data is soft enough they have the latitude to cut the Fed funds rate for economic reasons, as opposed to what’s going on in the financial markets.

Some experts are now concerned that the job losses could make a bad situation worse. Joshua Shapiro is chief U.S. economist at MFR:

JOSHUA SHAPIRO: It puts the future of consumer spending at risk, because income from job growth was basically propping the consumer up. And if that is weakening quite substantially, then the consumer is in trouble. So it sends some serious alarm bells about the underlying health of the economy.

Word of the job losses even prompted a prominent congressman to break with the tradition of not putting political pressure on Federal Reserve policy-making. House Financial Services Committee Chairman Barney Frank said flatly he wants an interest rate cut when chairman Bernanke and his team meet on September 18th.

BARNEY FRANK: The time has come to take action that will make a more serious slowdown less likely.

While the pressure is clearly mounting, still other data due next week — readings on consumer credit and business inventories — could also sway the Fed policymakers. And economist Ken Mayland says it will undoubtedly be looking at similar situations in the past. Mayland points out that even after stock market crash of 1987, and the credit crunch of 1998, the economy remained resilient:

KEN MAYLAND: You’d think the whole world was coming unglued, and yet there was no recession.

Mayland is confident that could yet be the outcome this time around.

Ryssdal: Picking up on that last bit Bob mentioned about 1987 and 1998. Former Fed Chairman Alan Greenspan said today what’s happening in the economy now reminds him a lot of what was going on back then.