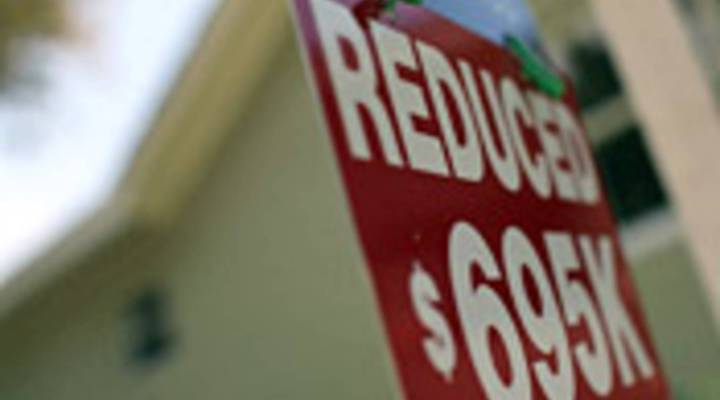 COPY
A sign announcing a reduced price of $695,000 hangs in front of a home for sale. Joe Raedle/Getty Images

A sign announcing a reduced price of $695,000 hangs in front of a home for sale. Joe Raedle/Getty Images
Listen Now

Doug Krizner: It was the summer of subprime sludge, a huge mess created the mortgage market by the collapse of risky loans. The consequence has made getting a mortgage more difficult and expensive. That’s especially true here in LA, as Stacey Vanek-Smith reports.

Stacey Vanek-Smith: Gone are the days when you could land a home loan with less-than-sterling credit and no money down. Mortgage lenders and big banks have gotten very finicky in the last few weeks.

Mitch Ohlbaum is a mortgage broker in Los Angeles. He says if you want to get a decent interest rate now, you’d better have great credit and be prepared to put down a big chunk of change.

Mitch Ohlbaum: For now, the standard is really going to be 10 percent if you want to buy something. Which in the real world’s not so bad, it’s just a little bit more difficult where we live, where everything’s a million dollars.

Ohlbaum says 10 percent down is unrealistic for many of his middle-class and working-class clients, even those with steady incomes and good credit. The result? They can’t get the loans they need to buy in L.A. where the median home price is well above a half-million dollars.

Dan Arguelles is a real estate agent in Manhattan Beach, Calif. He says the restrictive lending practices mean homes in his tony area are taking longer to sell.

Dan Arguelles: Now it’s getting even tougher, that you have to state your income. It is getting a little harder to find that qualified buyer.

The same thing is happening in New York, San Francisco and Washington D.C.

Housing market economist David Lereah is with move.com. He says a couple months ago it was too easy to get a loan, now it’s too hard.

David Lereah: We need to be making loans to families that have the financial wherewithal to buy these homes. That’s the American dream, is homeownership. And now we’re keeping families out of that dream, because we’ve overreacted to this boom-bust cycle that we find ourselves in.

Lereah says if the credit-crunch continues, it will erode consumer confidence in high-priced real estate markets and that could spread to the broader economy.

Other economists say if consumers stop buying homes, they will stop putting money down on cars, won’t go on as many vacations and the consumer spending that’s been driving the economy will dry up.