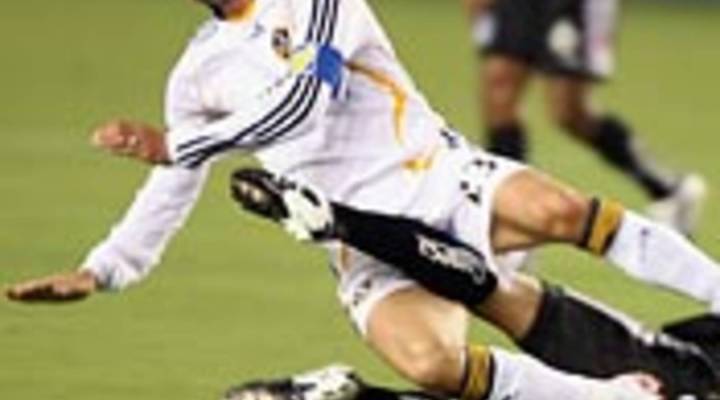 Tess Vigeland: That groan you heard emanating from L.A. last night? That was soccer fans wondering what’s next for Bad News David Beckham. The superstar footballer injured his right knee in an international game with the Los Angeles Galaxy. As Becks himself said, “It’s just gone from one thing to another thing.”

So we’ve got David Carter on the line to talk about what’s going on with one of the highest-paid athletes in all of sports. He is the founder of the Sports Business Group. Welcome back to the program.

David Carter: Good to be here.

Vigeland: So now obviously, David Beckham could heal from this injury and get better and play all the rest of the games that he’s committed to for the MLS. But for the time being, how do you think MLS and Galaxy fans are feeling at this point, giving that he’s played what, half a game in total?

Carter: It hasn’t been a whole lot of quality time yet, and I think you have to really break it down into two different scenarios. There is the casual fan, who I think really feels slided. These are the fans that bought their tickets under a certain set of expectations, but are receiving something quite different. And although there’s no guarantee when you buy a ticket that you’re gonna be able to see a specific player, I think the level of disappointment is now at a national level, as it’s likely that he’s gonna continue to miss some additional road games.

You know, that’s sort of the first part of it. The second bucket is those international fans that are really the sports aficionados that might be here in this country. And my guess is that they might be a little less surprised by this, and in fact, they may not have been spending as much on Beckham as that casual family of four — the ones that might be playing youth soccer in this country, for example.

Vigeland: Put yourself in the front office for a minute, either at the Galaxy or at MLS headquarters. And are they concerned at this point? Have they already essentially reaped everything that they were hoping for from him?

Carter: Well, I think those might be two different issues. I think it’s indisputable that Adidas, the Galaxy, Major League Soccer, even sponsors like Herbalife that have come online have done quite well. I think you could probably argue very strenuously that they have received their return on investment. However, there is ill will being created, as we’ve talked about, among fans who have purchased tickets with the expectation of seeing him.

So, you know, I think it’s gonna come down to how do they manage expectations the rest of the way. Are people going to want to continue to invest their time and hard-earned money not knowing if he’s going to be playing? Not just for the next few weeks, but what does it mean for the next year or two, when he continues to get older? And if his travel schedule continues to be as intense, how likely will be that he’s gonna continue to be hamstrung by injuries?

Vigeland: David, what about the league itself, Major League Soccer? He could come back, as we’ve mentioned, but if he’s not the active player that everyone expected him to be, what does that mean for the league?

Carter: You know, it may not be that devastating. I think that David Beckham can get those casual fans to the front door, he can get them to the turnstile. It’s ultimately gonna be up to MLS to service those people, to make sure they have a safe and affordable time at the game, and in fact they walk out of there thinking to themselves that attending an MLS game is as strong a source of entertainment as anything else they could have done. And so, you know, he can be the pied piper in terms of getting them to the turnstile, but then I think it really is about overall quality of the experience that will get these fans coming back.

Vigeland: David Carter is the executive director of the Sports Business Institute at the University of Southern California. Thanks for chatting this over with us.

Carter: Thank you very much.