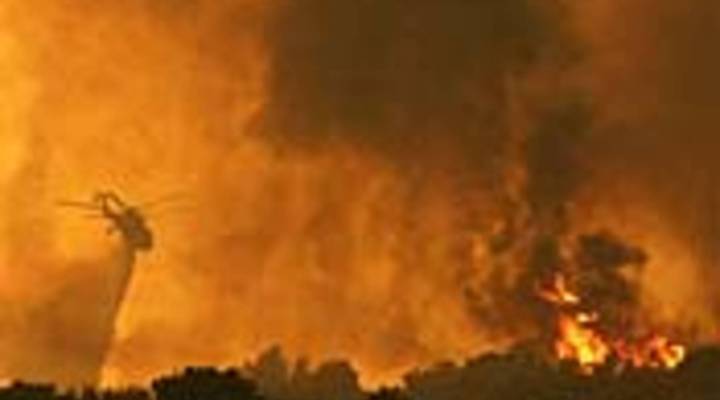 Paying to put out Greece’s flames

COPY
A helicopter flies through the smoke from the fires burning in Ancient Olympia, Greece. Milos Bicanski / Getty Images

Paying to put out Greece’s flames

A helicopter flies through the smoke from the fires burning in Ancient Olympia, Greece. Milos Bicanski / Getty Images
Listen Now

Tess Vigeland: In Greece, dozens of people have died in a series of savage forest fires that ripped across the country over the last two days. The blazes have also threatened the nation’s crucial tourist industry.

Greek authorities have declared a state of emergency. And they’re offering a hefty reward to anyone who can help nab the arsonists they suspect are behind the fires.

Vigeland: Well, there is talk already that this could be arson-caused. What’s the latest?

Beard: Yes, indeed. The government certainly believes that some of these fires were set, that arsonists have been at work. More than 30 suspects, in fact, have already been arrested, and the government’s offered a reward of about $1.5 million for further information. One theory, and a lot of theories have been spreading around, is that rogue real-estate developers may be behind this. That they may have torched an area of protected forest land so that they would, it would then become possible to develop that land. Now as yet, there’s no hard proof of that, but that is one rumor that is gaining ground.

Vigeland: Now, Greece has obviously gone beyond its own capacity to fight these fires. And there are crews in from all over from the European Union. How is that paid for?

Beard: Well initially, it will be paid for by the countries involved. And the effort is unprecedented — something like 11 countries have donated help with firefighter planes and helicopters and specially-trained personnel. And the help has come from as far a field as Canada. But what the Greeks will be able to do within days is apply to what is called the E.U. Solidarity Fund. This was set up a few years ago precisely to help member states deal with disasters like this.

Vigeland: Now, that is the aid for countries involved. What about victims of this fire? You know, if something like this were to happen in the U.S., people would be asking for aid from the federal government. What does a small country like Greece do in this kind of situation?

Beard: Well, all they can do at this stage is get this emergency financial aid. In the case of Greece, clearly there’s gonna be much less money than in the case of the federal government. It is a relatively poor country, it is a relatively poor member state in the E.U. In fact, eventually in time, Greece will be able to turn back to the European Union, and if it can prove that its economy and its infrastructure have been very seriously damaged by the fires, it may be able to get a great deal more financial aid for reconstruction from the E.U.

Vigeland: All right. Marketplace’s European Bureau Chief Stephen Beard. Thanks so much, Stephen.