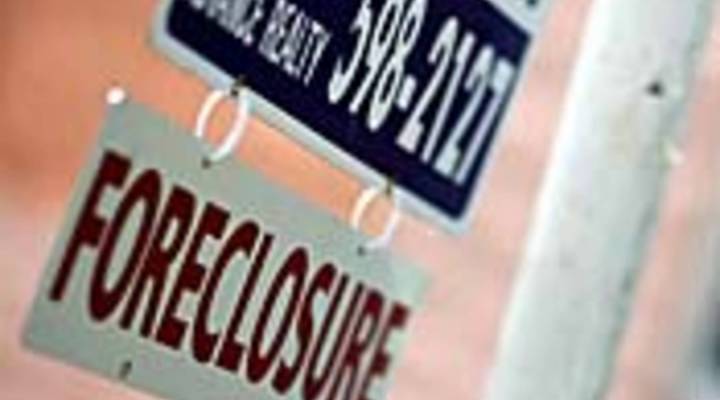 KAI RYSSDAL: For the first time in what seems like forever, a turbulent stock market isn’t the lead story of the day. Investors were generally mellow as they tried to make up their minds about what lies ahead.

There were some troubling indicators, though. And they sprang from the source of all the problems to begin with — the mortgage industry. The subprime lender Luminent agreed to sell a majority stake in itself this morning — at bargain basement prices just to find the cash to stay in business. Thornburg Mortgages, known for its prime jumbo home loans, let go of more than $20 billion in primo mortgage-backed securities today. And the lending giant Countrywide, the one that’s been hammered for its subprime exposure, has started laying off some of its workers.

Stacey Vanek Smith has the details.

Stacey Vanek-Smith: Storm clouds are gathering over mortgage companies right now, and it’s a world full of fair-weather lenders. Christopher Thornberg is with Beacon Eonomics. He says the banks and hedge funds that normally loan money to mortgage companies to make their loans have turned off the spigot.

Christopher Thornberg: People who have money in these mortgage companies, are now recognizing the fact that their money is at severe risk. And so they are rapidly trying to yank their money out of the system and that’s creating a liquidity crisis.

That has all mortgage companies scrambling for cash. And if they don’t get it fast, they can’t survive, says Columbia Business School’s Chris Mayer.

Chris Mayer: If you’re having a hard time originating new loans, you’re not going to be able to cover your overhead and your future profits look bleak.

To get cash fast, the severely troubled Luminent Mortgage Capital announced today that it had sold off a big chunk of itself at a discount price. Thornburg Mortgage is in better shape, but reportedly sold more than $20 billion worth of its best assets at a loss. Lending giant and industry bellwether Countrywide is slashing staff. So all three lenders have cash for now, but Mayer says the future looks bleak for mortgage lenders and the rest of the economy.

Mayer: The loss of liquidity in the mortgage market, I think, is a huge recession risk for the U.S.

Mayer says it’s hard to get a mortgage loan right now, but if things don’t improve, it could be difficult for consumers to get any kind of credit — from car loans to student loans. He says that would wreak havoc on the U.S. economy.

Mayer says, for the moment, all eyes are on Countrywide. The mortgage mammoth generates about 20 percent of all mortgage loans in the U.S.