More From This Show
0:00 / 0:00
We need your help to reach our fiscal year-end goal tomorrow. Donate Now
My Two Cents

Thanks to a reference by Andrew Samwick, economist at Dartmouth University, here’s a link to a good piece on the tragic bridge collapse in Minneapolis by Stephen Flynn:

In the end, investigators may find that there are unique and extraordinary reasons why the I-35W bridge failed. But the graphic images of buckled pavement, stranded vehicles, twisted girders and heroic rescuers are a reminder that infrastructure cannot be taken for granted. The blind eye that taxpayers and our elected officials have been turning to the imperative of maintaining and upgrading the critical foundations that underpin our lives is irrational and reckless.

America’s gross domestic product in 2006 was $13.2 trillion. We can afford to have world-class infrastructure. As a stepping-off point, we should insist that our elected representatives publicly acknowledge the risk of neglecting the bridges, roads and other essential hardware that goes into making a modern civilization. Then we should hold them accountable for setting priorities and for marshaling the requisite resources to repair our increasingly brittle society.

Samwick rightly adds this observation at his blog:

What I see most places I travel around the country are homes that are overbuilt to nearly the edge of the property line, and then a crumbling infrastructure across that line. Roads, power lines, sewers, schools–you name it. Almost everything used in common across that property line is stressed to the point of breaking.

Too much neglect for too lomg of the common space. 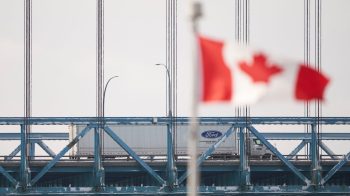