Kai Ryssdal: The Department of Health and Human Services has a man in China today. He’s leading a team negotiating a deal on food and drug safety. The U.S. government wants an agreement in place by December — a deadline that’s been driven in part by congressional hearings into potentially unsafe Chinese imports.

One of the first questions people who’ve been injured in cases like that usually ask is, who do I sue? The answer is not the Chinese manufacturer. American product-liability lawyers are choosing targets a bit closer to home. Marketplace’s Steve Tripoli tells us why.

Bill Ruskin: If you are anywhere in the stream of distribution, you are potentially liable for selling a defective product — although you may have had no knowledge that the product you sold contained a harmful substance or was otherwise defective.

But Ruskin says it’s also just a matter of where the money is.

Ruskin: By going after the distributor, you can find a deep pocket in the United States that has assets and can pay a judgment.

That eliminates jurisdiction and collection problems. It also cuts out the politics.

Michael Hausfeld’s Washington law firm is looking into filing some drug and pet food suits. He says there are also logistical problems with going after a Chinese company. That’s because products often move from cell to cell along a chain of firms before they’re assembled and sold.

Michael Hausfeld: If you’re four or five cells removed in a chain of sale or distribution, you’re only gonna know the person that you directly deal with and not the person whom that person directly deals with.

Hausfeld says that’s what happened in some cases where pet food was contaminated. Manufacturers in the U.S. literally had no idea where the ingredients originated. But ignorance is no excuse.

People who bought Chinese-made car tires are at the heart of one prominent case. The government and a private lawyer are going after New Jersey-based Foreign Tire Sales, which distributed the tires nationally.

FTS is a small company — just 13 employees. But it says one of them was a full-time engineer who drew up specifications for imported tires to meet U.S. standards.

An accident on some of those tires claimed two lives. Victims’ families sued. And FTS says it learned the tires were missing a component they’d ordered called a “gum strip.” It holds tire treads together.

Company executives wouldn’t speak with us — they’re in sensitive negotiations right now. But here are excerpts read by one of our staff members from public statements the company made before going silent:

ACT Tire Statement: FTS was being sold tires that did not meet our own standards and posed a safety hazard. These tires were manufactured without a gum strip, or with an insufficient gum strip between the belts or other construction. Such construction is susceptible to belt and/or tread separations.

FTS doesn’t deny that it’s required by law to take responsibility. The Chinese manufacturer, on the other hand, still denies its tires are defective.

Washington attorney Michael Hausfeld says the whole mess illustrates a shortcoming of globalized production and distribution chains. He says uniform, global quality standards for goods are a must — and people on the importing end are starting to realize that.

Hausfeld: I think any distributor or manufacturer or integrator is on notice that they need to do something more than just accept the good without any further confirmation as to the source or the quality of the ingredient or component.

Liability lawyer Bill Ruskin says the recent scandals will force some changes. And he says they’ll show up on both ends of the import-export chain.

Ruskin: I think you’re gonna see some winnowing. In China, you’re gonna see a lot of the smaller Mom-and-Pop exporters going out of business. In this country, only larger distributors that have the assets to assure retailers that they’ll be financially responsible for any losses will be taking the pre-eminent position in the marketplace.

Ruskin says one way globalization can make a positive difference here is through shareholder activism.

Foreign investment has driven much of the Chinese manufacturing boom. He says American and European investors need to step up to the plate now and start policing the Chinese companies they invest in. 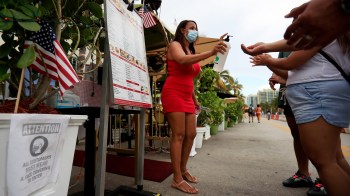