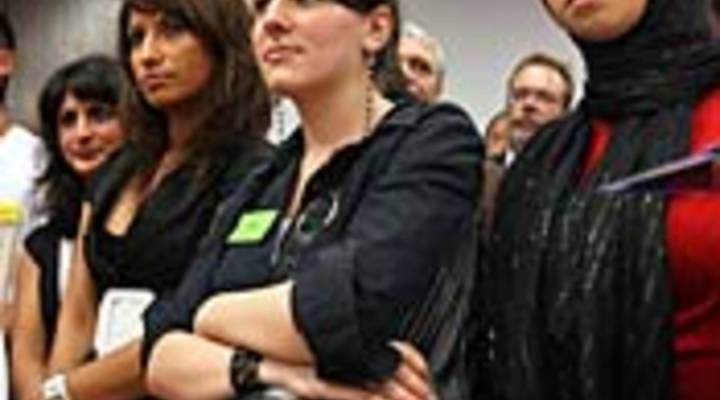 COPY
High school students of Turkish descent attend a ceremony honoring them for achieving high school degrees and participating in a program aimed at promoting the integration of children of non-German parents into German society through education. Sean Gallup, Getty Images

High school students of Turkish descent attend a ceremony honoring them for achieving high school degrees and participating in a program aimed at promoting the integration of children of non-German parents into German society through education. Sean Gallup, Getty Images
Listen Now

KAI RYSSDAL: It might be politically finished in this country for the time being, but on the other side of the Atlantic immigration’s all of a sudden become issue number one. After the failed car-bomb attempts in London and Glasgow last week . . . British Prime Minister Gordon Brown’s promising tougher checks for highly skilled workers wanting to immigrate.

The suspects are foreign-born doctors with the British National Health Service. But Britain’s not the only European country looking at its immigration rules. Germany’s just approved another round of reform. And one of the bill’s most talked about provisions puts the German language front and center.

Nancy Farghalli: More than 2 million Turks live in Germany. And this is their Turkish radio news show, Koln Radyosu . . . [Music from Koln Radyosu]

Tonight’s main story is on the new language rule. Now spouses from non-European Union countries must learn German before they can join their partner. Well enough to chat about the weather and ask directions. Foreigners who normally don’t need visas in Germany are excused. The law does not specifically name a country, but it’s pretty easy to read between the lines. That’s according to Murad Bayraktar, the show’s editor.

Murad Bayraktar: This is really criticized by the Turkish community because there are so many people in Turkey who even don’t know how to write and read. So, also they have a right to marry even if they don’t know the German language so well.

The German government estimates that almost half of Turkish immigrants find spouses outside Germany. Often, parents still arrange the marriages and import brides and grooms. Ali Aslan is with the German Interior Ministry.

Ali Aslan: When it’s time to marry, they seek their brides not here but from their home villages in Turkey. And these people do not speak a word of German, of course, so it’s a culture shock for them.

And an economic shock for the German government. Aslan says these new immigrants are not from big cities. They’re not usually college educated. And he says they face a German population historically resistant to Turkish migration.

Aslan: The famous term guest worker stems from the fact that they were guests in the eyes of the Germans — meaning temporary. Guests come, but they also leave at some point.

In the ’60s, Germans needed the Turkish workforce. They were expected to leave, but they never did. And now Aslan says Germany is working hard to integrate a community it ignored. But don’t expect a welcome mat from Turkish neighborhoods in Germany. Saftar Cinar is with the Turkish Union-an advocacy group in Berlin.

Saftar Cinar: All the measures are punishment. If you wait 40 years, and then you want to solve all the big problems in a short time, you can’t do it.

He says even if newcomers speak German, they won’t find jobs. In Berlin, he says, the unemployment rate for Turks is 35 percent. Families here don’t have the income to pay for language schools in Turkey. German classes can cost $500 a week.

But Turkish German Author Seyran Ates says the government has no choice. She has counseled foreign brides.

She drinks tea in a Berlin restaurant while waiters sort silverware. She only does interviews in public places. Years ago, Ates was shot in the neck in front of a women’s center for Turkish immigrants.

Seyran Ates: Most of my clients couldn’t speak German when they came here, and families don’t allow them to learn German. If they learn German, their eyes will be open.

Open, she says, to the opportunities outside the home.

Ates: If you come to Germany, you are not alone. And you are not only coming to a traditional Turkish family. We want to help you.

So do the German language schools in Turkey. Many plan for growing enrollment as spouses learn the language of their future.