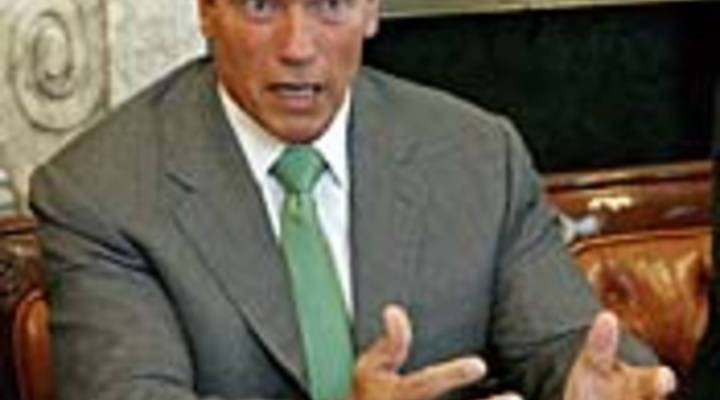 KAI RYSSDAL: California Gov. Arnold Schwarzenegger has made some media-savvy moves since he took office almost four years ago. He’s turned down his state salary. And he pays for some of his own official travel inside the U.S. But the Los Angeles Times reports today Schwarzenegger has let charities pay for some of his pricey overseas trips. Trips featuring private jets and four-star hotels. The governor gets where he’s going in style. And donors to those charities get tax write-offs. Stacey Vanek-Smith explains.

Stacey Vanek-Smith: Back in 2003, Arnold Schwarzenegger ran for California’s governor as an outsider who would terminate political corruption in the state.

SCHWARZENEGGER CAMPAIGN AD: Special interests have a stranglehold on Sacramento. Here’s how it works: Money comes in, favors go out, the people lose.

That hasn’t stopped Schwarzenegger from letting the tax-exempt charity, California State Protocol Foundation, pay for most of his out-of-state travel. Luxurious travel, at that. The foundation is partly controlled by California’s Chamber of Commerce. And that smacks of special-interest interference, says Edwin Bender of the National Institute on Money in State Politics.

Edwin Bender: If you have someone who’d wanted access to the governor, then the Chamber of Commerce would be the perfect intersection point for both the money and arranging one person to fly on the jet with the governor to wherever. So people who are wanting to get in and give a pitch for a project, it would serve them very well.

By going through a charity, donors aren’t subject to the usual disclosure rules. So they can give an unlimited amount of money — tax deductible money. And they don’t have to reveal their identities.

Daniel Borochoff is president of the American Institute of Philanthropy. He says this is an abuse of charitable status, and that the problem is getting worse.

Daniel Borochoff: More and more nonprofits are being utilized by special interests or personal interests rather than for public benefit purposes.

Borochoff says abusing the tax-exempt status can have a harmful effect on legitimate charities, such as soup kitchens and shelters, as donors become suspicious of how charities are using their money.